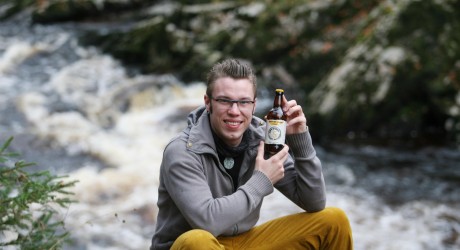 A SCOTS chemistry student has signalled the start of economic recovery for his home patch of Moray by opening the area’s only brewery.

But with a welcome boost to local morale Seb Jones, 25, opens his Speyside Craft Brewery this week after 18 months of planning and fund-raising.

A former Aberdeen University student, he had considered following many of his peers into the petro-chemical industry.

But he said that he always felt drawn to doing something different with his expertise, and the prospect of improving on the beer he and his dad used to make in their garage also seemed a good idea.

Toasting the launch of his first two beers, he said it’s a wonder he survived the home brewing years.

“Compared to what I’m producing now, I don’t know how we drank that home brew – it was dreadful,” he said.

“There is so much chemistry in brewing – it is a chemical process after all – that having that background means I now understand what’s going on in the beer.

“I’ve spent many months of recipe formulation to create the beers I’ve produced so far and I’m delighted with how they taste. I hope others will enjoy them as much.

Seb is launching the brewery at the nearest bar to his production base, The Mosset Tavern in Forres, on Wednesday November 21.

The launch will herald the release of two beers that celebrate his home stomping ground in Scotland’s North East, Moray IPA and Randolph’s Leap lager. More are planned that will carry names of local icons to further promote the area beyond its borders.

“I want my beers to be sold far and wide in the UK and abroad, and by carrying names synonymous with the area I hope it attracts people to visit Moray,” he said.

“Randolph’s Leap is a very special place on the River Findhorn close to where the brewery is in Forres; I have spent many days there with family and friends jumping into the lagoons and kayaking. Naming a refreshing lager beer after it was a natural step for me and a nod to my happy formative years there.”

The brewery is the only one in Morayshire, the nearest commercial brewery at Tomintoul, Banffshire having closed down nearly ten years ago.

Speyside Craft Brewery will start with a weekly capacity of 4,200 pints, and beers will be available in bottles and casks from all good bars and off-licences.

Funding for the project has been in the form of loans from The Prince’s Scottish Youth Business Trust, the East of Scotland Investment Fund, and private investors.

Moray MSP and Cabinet Secretary for Rural Affairs, Richard Lochhead, said that the food and drink sector was one of Scotland’s most important growth areas.

“Scotland’s food and drink sector is of critical importance to our economy. Here in Moray we have many world-renowned brands and it is fantastic to see a young entrepreneur like Seb tapping into that strong reputation and the demand for quality produce.

“There is a market for craft brewing that can be exploited with good quality products and strong marketing, and I know that Seb has a huge amount of enthusiasm for this new business as well as his knowledge and technical expertise of brewing.

“I wish Seb every success for the future with his new addition to Moray’s very varied food and drink larder.”

Chair of the Moray Economic Partnership, Jim Royan, welcomed the launch of Speyside Craft Brewery. The partnership was established to diversify the area’s economy following the threat to Moray’s economy from the Strategic Defence and Security review which saw the loss of RAF Kinloss.

Speaking from the brewery yesterday, he said: “This is more great news for Moray from a young man with real ambition.

“Many agencies have come together in the spirit of the Moray Economic Partnership for Seb to arrive at this point, which shows what we can do by working together.”

MEDIA RELEASE posted by Moray Council. You too can post media releases (aka press releases) on allmediascotland.com. For more information, email here.