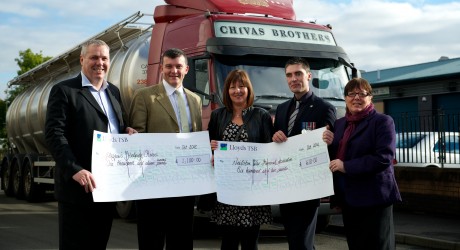 A CHIVAS Brothers employee has raised more than £1,200 for two local veterans’ charities.

Matthew Drennan of Strathclyde distillery in Glasgow raised the cash by holding a charity auction at his local Neilston bowling club, and his employer Chivas Brothers added a further £500 to the pot through its doubling up scheme.

Doubling up matches employees charity fundraising by up to £500 each year. Matthew chose Glasgow’s Helping Heroes to receive the added £500, making the total donation £1,100 to this charity.

On top of this, Matthew’s wife Jacqueline also raised £2,500 for veterans recently, when she completed at 30km trek along Hadrian’s Wall for national charity Help for Heroes.

Matthew said: “These charities are very close to our hearts.

“My brother in-law is currently serving in Afghanistan, so the conflict is always close to home. It makes you feel humble when you see ex-servicemen such as David Timmins of Neilston War Memorial Association, who have themselves been injured in combat, working tirelessly to raise money for those less fortunate.

“We wanted to help in any way we could, just to say thanks to these very brave people.”

Barry Henderson MBE accepted the donation on behalf of Glasgow’s Helping Heroes. He said: “This is a tremendous contribution which will directly help veterans and their families in the Glasgow area.

“This money will allow us to enable veterans to overcome the obstacles that they may face as they transition into civilian life. The generosity of Chivas Brothers, their staff and families is greatly appreciated.”

He added: “I am very humbled by this support and would like to thank everyone involved on behalf of my family and the Neilston Community.

“The money will be used to build a long overdue Cenotaph in Neilston, commemorating fallen members of our armed forces involved in every conflict since the Great War.

“We aim to have the Cenotaph built by September 2014, marking 100 years since the start of WWI.”

Strathclyde distillery is owned and operated by Chivas Brothers – the Scotch whisky and premium gin company of Pernod Ricard – and produces the grain whisky for world-renowned blended Scotch whiskies including Chivas Regal, Ballantine’s and Royal Salute.

Glasgow’s Helping Heroes is a Glasgow City Council funded initiative to help Serving Personnel, Veterans, their dependents and carers who live in, work in, or wish to relocate to the City ofGlasgow. The service is provided by a division of theGlasgowbranch of SSAFA-Forces Help. It is a free, confidential one stop referral service for anyone who has served in the Regular and Reserve forces.

Individuals can self refer or be referred by any third party. We have a drop in facility at 15-17 Duke Streetin Glasgowand we can be contacted either via our website www.glasgowshelpingheroes.org or by phone 0141 276 7197

MEDIA RELEASE posted by Richmond Towers. You too can post media releases (aka press releases) on allmediascotland.com. For more information, email here.