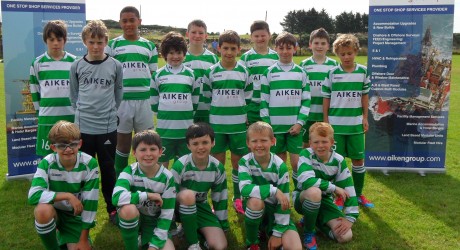 ABERDEEN-based Aiken Group has underlined its commitment to up-and-coming local sporting talent with a sponsorship deal.

It is headquartered on Crombie Road in Aberdeen and the 25 year-old company employs 64 staff at its headquarters plus around 100 contractors worldwide.

Aiken Group recently provided financial support in the form of strip sponsorship to the city’s Lewis United under-13 football team in a bid to inspire sport stars of the future.

The team is part of the Bridge of Don-based Lewis United group of football teams which offers football opportunities to children from age seven upwards with current membership of more than 100 local boys.

The club is currently on the lookout for new players to join the ranks.

Commenting on the deal, Lewis United spokesperson, Neil Paterson, said: “We are delighted that Aiken Group has agreed to this new sponsorship deal and hope that the lads will do them proud by performing well on the park this season.”

Aiken Group managing director, Danny Donald, added: “Aiken Group has a long association with local sport and we are committed to providing assistance to young people in a broad range of disciplines.”

Issued by Granite PR on behalf of Aiken Group.