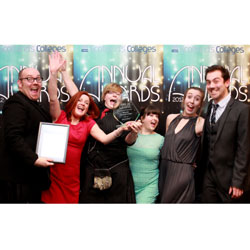 EDINBURGH College has won its first national award since it was created with a campaign to raise awareness for the lesbian, gay, bisexual and transsexual (LGBT) youth community.

The college scooped the title in the Equality and Diversity category at Scotland’s Colleges annual awards for its LGBT History Month which was marked with the launch of its LGBT Society – a support group to address homophobic bullying.

“Edinburgh College is the first Scottish college to launch this kind of initiative and for the campaign to be recognised at a national level is a significant milestone as we believe it can grow and help many people in their constant battles for acceptance.

“It’s been extremely rewarding to see other colleges following our example as to how homophobic bullying can be addressed with a hub like the LGBT Society, where people can share their experiences and talk openly about the issues affecting them.”

To promote equality and diversity for LGBT History Month, a series of events and workshops were organised including a production of the play, The Laramie Project, a self-produced, ‘It Gets Better’, video and a LGBT role model conference.

Myra added: “Each of the activities was aimed to expose the prejudices often facing individuals due to their sexuality but with messages of how with support from loved ones it does get better and they are not alone.

“Our LGBT History Month events made an impact on the college as there has been a reduction in the number of reported incidences of bullying against our LGBT community.

“This is fantastic news and I’d like to take the time to congratulate those involved in offering a support network in the college and giving Edinburgh College the opportunity to be nationally recognised for such a rewarding cause.”

Planning is underway for next year’s LGBT History Month event and the college is examining whether the lessons learned from this approach can be used to address and discuss other issues of Equality and Diversity.

Edinburgh College was formed as a result of merger between Edinburgh’s Telford College, Jewel & Esk College and Stevenson College Edinburgh. As a £60m business, it is the biggest FE college in Scotland and accommodates more than 35,000 students – the biggest student body in Edinburgh.

Issued on behalf of Edinburgh College by Holyrood Partnership. For more information contact info@holyroodpr.co.uk or 0131 561 2244.