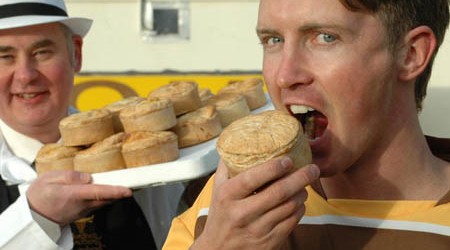 THE winner of the first-ever Scotch Pie Club Football Pie Awards is Murdoch Brothers from Forres who make the pie sold at Forres Mechanic’s ground.

Forty-eight football club pies were entered representing clubs at all levels across Scotland.

Old Firm favourites were competing with Bathgate Thistle and Ardrossan Winton Rovers to win the trophy for the best football pie in Scotland.

Following the busiest judging day ever, the Scotch Pie Club announced the winners of the best Football Pie on Tuesday 11th December and the makers of and representatives from the last six clubs standing were invited to attend the prize presentation.

The category for the best pie available for supporters to buy at a Scottish football match was introduced this year by the Scotch Pie Club Awards in recognition of the huge importance these hearty snacks play in the fans enjoyment of the beautiful game.

Judging in this category was undertaken by team of football fans and journalists, led by Jim Leishman.

Dr James Anderson from Forres Mechanics said: “Our fans love to enjoy a pie at a match and we are delighted to hear that ours is the best in the land.”

Speaking on behalf of the winning Murdoch Brothers, Ronnie Murdoch said: “We take huge pride in all of our products so to receive this recognition for our Forres football pie is the highest praise as we have been judged by peers as well as fans. It’s a huge honour.”

And it was a hotly-contested category, the Scotch Pie Club has recognised the ever growing popularity of a warming and tasty pie as part of the match day experience for football fans the nation over.

The traditional hard crust of the pie makes it ideal for eating at outside events with no need for wrapping with the warming and spiced contents bring comfort to thousands of fans on cold winter days.

The overall competition attracted a record entry this year with more than 100 butchers and bakers entering some 500 pies, pasties, sausage rolls, bridies and savouries into the competition.

The competition, which has run for 14 years, aims to highlight that bakers and butchers create high quality artisan pastry products. Recognising the ‘great and the good’ in this way rewards excellence and raises the bar in the industry.

Alan Stuart, competition founder, said: “It gives me great pleasure to be recognising the role the Football Pie plays in our sporting heritage in this way and I am delighted to say a great pie took the ultimate prize.”

The competition is supported by Scottish Bakers and the Scottish Federation of Meat Traders.  Both trade associations actively support and promote bakers and butchers in Scotland by encouraging and sharing best practise.