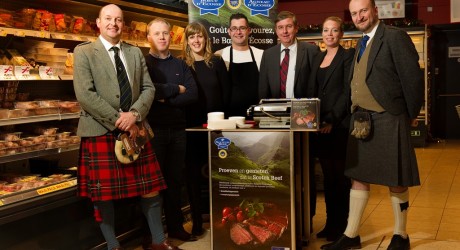 Retail chain Delhaize is launching a major campaign to increase sales of dry age Scotch Lamb over the festive period.

The pair were interviewed by the media during a visit to the flagship Delhaize store in Brussels where the Scotch Lamb campaign is attracting strong interest from Belgian press.

Delhaize, which is comparable to Waitrose here in the UK, has been successfully selling Scotch Beef dry sirloin to their customers since 2010.

They have now extended their range in all their 137 outlets in Belgium to include dry aged Scotch Lamb leg– a unique product in the Belgian market.

“The visit was a great opportunity to promote dry age Scotch Lamb to Belgian press and consumers,” said Mr Vernet.

“Delhaize focusses purely on quality and taste – Scotch Lamb fits perfectly with this ethos. Scotch Lamb stands out from its competitors because of its unique taste and it’s a natural product which is born and reared on farms in Scotland meeting the highest quality standards.

“It is vital that we continue to build on the already strong market presence in Belgium, and of course across Europe, to ensure that retailers and consumers are aware of the quality and provenance which underpins Scotch Beef and Lamb with its acclaimed PGI status.”

The campaign includes leaflet and in-store promotional activity including sampling of the product which is made using a dry ageing process.

Says a spokesperson: “Dry aging improves the texture and flavour of bone in lamb by hanging in a cool dry environment for a minimum of 14 days. In total, Delhaize expects to sell over 5,000 dry aged Scotch Lamb legs during the festive season.”