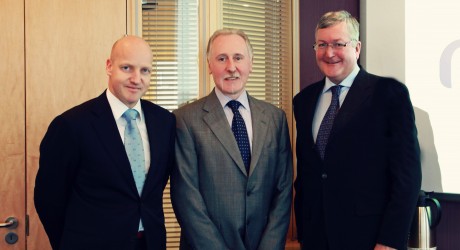 Having welcomed Mr Ewing into their head office in Crombie Road, Aberdeen, the minister was then introduced to various other members of the team including engineering, general support and administration personnel.

It was then down to business with Mr Ewing being witness to the formal signing of the joint venture documents and a light celebratory lunch to follow.

Eric commented: “It is such an exciting period for us and we were all very pleased that Mr Ewing was able to witness the official signing of the joint venture agreement with Nature Group.

“We have come such a long way in a very short time at InPro. All of us on the management team are extremely proud of everyone here as they have worked so hard and are now one tight team of dedicated individuals.”

In a few short months, the company has built an enviable client base along with a number of strategic partnerships within the oil and gas industry.

Energy Minister, Fergus Ewing, said: “Scotland has world leading skills in oil and gas, and the signing of the new joint venture between InPro and Nature Group is a great example of the innovation which goes into supplying the sector.

“The oil and gas sector is vitally important to Scotland’s economy. With more than half of the value of the North Sea’s oil and gas reserves yet to be extracted, up to 24 billion recoverable barrels with a potential wholesale value of £1.5 trillion, oil and gas will remain an enormous economic resource for decades to come.

“Services of the kind provided by InPro/Nature Group will be absolutely essential to ensure that the extraction of oil and gas from the North Sea continues to be done so in an environmentally sound way.

“Scotland’s Oil and Gas Strategy, developed in conjunction with industry, lays out a plan to help the industry go from strength to strength, and rising capital investment – reaching £8.5bn in 2011 and expected to rise to £11.5bn in 2012 – demonstrates the confidence investors and the industry have in Scotland.”