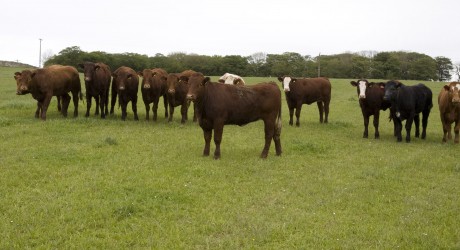 A TEAM of scientists has been demonstrating the benefits of cattle producers having a strategy in place to combat the consequences of Johne’s Disease.

Quality Meat Scotland is the lead industry partner in the ‘Paraban’ research initiative focussed on the disease which is a major concern to the Scottish cattle industry.

The project involves scientists, led by SRUC (Scotland’s Rural College), working closely with industry partners and is funded by the Scottish Funding Council in partnership with the Scottish Government.

The keen interest from livestock producers in the work the scientists are undertaking was reflected in 40 Caithness farmers turning up at last week’s meeting of Caithness monitor farm at Westfield near Thurso, which focused solely on the issue.

Nine holdings from Caithness to Cumbria are being put under the microscope in a bid to shed more light on the causes of the terminal, wasting disease and to advise on how to prevent it taking root.

In all of the herds, regular testing and prompt action to manage animals which test positive have reduced the incidence of Johne’s. The team of scientists is also following up evidence suggesting that the bacteria tend to thrive on acidic soil.

An update on the study was provided at Westfield Farm, near Thurso which became involved as a result of its participation in the monitor farm programme, supported by Quality Meat Scotland.

Tackling Johne’s was one of the objectives monitor farmer Johnnie Mackenzie set, with the local management group overseeing the three-year initiative. It is not thought his 300-cow herd has a higher-than-average incidence of the disease, with the holding having one or two cases each year.

Its involvement in the research was to help give a representative spread of large and small beef and dairy herds. Over the past years, it has been supplying blood and dung samples to the team of scientists behind the project which goes under the title of Paraban.

Vets and farmers view Johne’s as one of the most pernicious livestock diseases as for every member of a herd displaying symptoms, another 20 could be infected. Because the infection is often picked up when the cow is a young calf, animals can carry it for years without developing symptoms while being able to infect others.

The clinical signs of the disease include weight loss, diarrhoea and loss of milk output.

Johne’s, or parartuberculosis, has if unchecked, the potential to cause problems throughout the herd. Concern about the toll it is taking is growing with the latest statistics revealing its incidence in Scotland has almost doubled over the past ten years.

Seven members of the SRUC-led Paraban team made clear that doing nothing is simply not an option for producers.

Speaking afterwards, Inverness-based SRUC epidemiologist, Selene Huntley, said: “Our message is to test regularly and have a clear management strategy of isolating and culling members of the herd that have positive tests.”

She said this is borne out by the experience of Westfield and the other holdings included in the research.

“In the two years since we have been testing, we’ve seen a gradual decrease in the number of infected animals in the herds.

“We advocate frequent testing of the whole herd and farmers agreeing with their vets what long-term control strategies they need to implement.”

Ms Huntley clarified that a positive test indicates the presence of the infection that will lead to the onset of the disease. Once its prevalence in a herd is known, an action plan can be worked out to prevent healthy members being infected.

This would feature biosecurity measures to segregate those known to be infected and a culling programme. The soil link was picked up by scientists at James Hutton Institute, who are part of the Paraban initiative.

Ms Huntley said: “They found that the bacteria that cause the disease like acidic soils, rich in organic matter and available iron.”

Following this up, the team are monitoring how the application of lime to raise the pH of the soil impacts on the incidence of the infection. Teams from Glasgow and Edinburgh Universities are also contributing towards the three year research project.

Ms Huntley said too many producers are burying the heads in the sand. “We’re trying to raise awareness among cattle producers of the need to test and then decide what they need to do. We fear some are not testing or not testing frequently enough.”

Ms Huntley said Westfield’s Johne’s status is probably representative of cattle enterprises of its size in the Highlands. “They haven’t got a huge problem but it’s something they want to get on top of.”

She believes that there are major gains for Scottish farming if producers take the initiative and work to control Johne’s Disease.

“One of the reasons we’re doing this research is to help the industry increase efficiency through improving animal health. We’d like Scotland to lead the way in terms of upholding the high health message.”

The impact of the CAP reforms is the subject if the next Westfield monitor meeting being held in mid-January.

The final meeting to review Westfield’s three years as a monitor farm will take place on February 20.