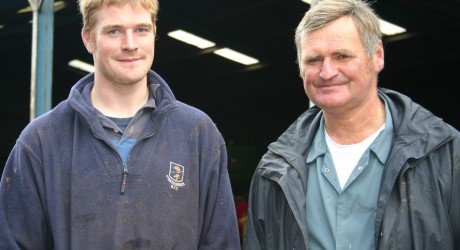 A WIDE range of farming topics will be considered over the next three years by the community group of the recently launched Forth Monitor Farm, one of the network of monitor farms led by Quality Meat Scotland.

The McEwen family, Duncan senior and junior and their wives, Anne and Rebecca, of Arnprior Farm to the west of Stirling, hosted their first monitor farm meeting in early November. A major feature of that initial meeting had been a farm tour to enable the community group to view the majority of the Arnprior farmland which ranges in altitude from 30 feet (10m) above sea level on the Carse, to a peak of 590 feet (180m) on the hill, classified as ‘Lowland Heath’. The group were also shown the 70 head suckler herd and sheep from the breeding flock of 550 females.

At the second meeting held in early December, to establish topics for future meetings, the McEwens outlined particular sectors of their farming enterprise which they will ask the community group to consider during their monitor farm term.

Heavy rainfall has created significant challenges to many farmers throughout Scotland, not least the McEwens. Duncan senior explained: “The weather has a huge impact on us here, it dictates everything. For every mile west of Stirling, annual rainfall increases by an inch and we’re currently averaging around 55 to 60 inches.”

Figures from the ‘Stirling Weather’ website show 2012 rainfall for Stirling, as at 8th December, being 42.83 inches.

The 1934 edition of ‘Transactions of the Highland and Agricultural Society of Scotland’ gives Stirling’s 1933 total rainfall as 26.18 inches.

A straight comparison of the above figures (with 23 days still to go in 2012) reveals an increase in rainfall for Stirling over the last 79 years of approximately 65 per cent.

The heavy rainfall has influenced some of the topics planned for future monitor farm meetings, which will include:

Stock are treated for liver fluke. However following lamb deaths earlier this year, the McEwens suspect that there are Triclabendazole (flukicide) resistant fluke on their farm.

Abattoirs condemn fluke damaged livers. Their experiences confirm that the incidence of fluke has increased considerably in recent years. Government figures for the UK show that currently 1.34 million sheep and cattle livers are being condemned annually, costing the industry over £28 million.

It is planned to focus on liver fluke along with other internal parasites at the next Forth monitor farm meeting, scheduled for the end of January. Prior to this meeting, faecal samples for analysis will be taken from the Arnprior stock, to provide an indication of the type and level of internal parasites the McEwens need to combat.

For further information, please contact either of the joint facilitators:

For general information on monitor farms, plus detailed reports of meetings, visit: www.qmscotland.co.uk/monitorfarms

MEDIA RELEASE posted by Quality Meat Scotland. You too can post media releases (aka press release) on allmediascotland.com. For more information, email here.