Media Release: Top-notch first week at The Gaiety, as more than 4,300 people flock to the newly re-opened venue to enjoy ‘Cinderella’ 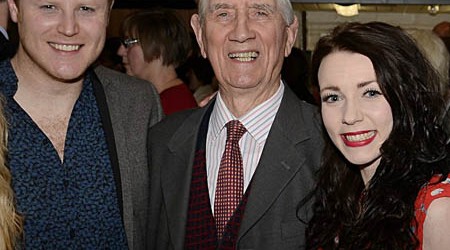 THE Gaiety enjoyed an unprecedented first week of operation as a new Arts & Theatre Centre for Ayr, as hoards of people, young and old, came to enjoy a first week of panto magic at the iconic Ayrshire theatre.

Enthusiasm for both the panto and the venue was clear:

“I just wanted to contact you following today’s performance of ‘Cinderella’. The pupils had a wonderful time; I really thought it was a fantastic production… I’m glad we made the decision to stay local.” Jacqueline McGhie, principal teacher of English, Queen Margaret Academy

After a bustling run of schools shows filled with excitable pupils, the adults’ turn came on Friday night, as the curtain came up on the Gala performance.

Ian Welsh, chair of Ayr Gaiety Partnership thanked a long list of supporters in his post-show speech, adding: “We’re truly delighted that our dream is finally a reality. The re-opening and re-imagining of the Gaiety marks an outstanding achievement for all supporters and dedicated volunteers who have contributed time, energy and hard work.

“With a packed 2013 Spring Programme to herald the New Year, we can’t wait for audiences to make the Gaiety their own. This opens up a whole new world for arts and culture within south-west Scotland and we hope as many people as possible will join us to help ensure the long-lasting success of The Gaiety.”

Cinderella opened The Ayr Gaiety on 11 December 2011. A spellbinding pantomime full of music, magic and mayhem, special effects, breathtaking sets, loads of laughs and lavish costumes, Cinderella is the perfect Christmas treat for all the family and one of the most sensational and magical pantomimes to come to The Gaiety. Cinderella stars Gary Lamont (‘River City’), Leah Macrae (‘Gary: Tank Commander’) and Michael Courtney.

“…a good-natured show that is never pretentious, but has enough energy, style and small-scale elegance to give this great little theatre the welcome back it deserves.” *** Joyce McMillan, The Scotsman

“A truly fitting production with which to welcome an old theatre back into life.” Thom Didbin, The Stage

A stunning and packed Spring 2013 programme has launched alongside a new look website. Face-to-face bookings are now open at the Gaiety ticket desk. With over eighty individual events in the Gaiety Spring calendar, The Gaiety will be showcasing emerging musical talent and sharp-witted comedy in the Studio alongside digital film screenings and performing arts workshops.

Elkie Brooks returns to the Gaiety in January, as one of many returning former friends. There will be many new faces too and we are privileged to host the National Theatre of Scotland’s very latest touring production ‘Calum’s Road’. We have professional ballet, opera, drama, music for all tastes, local amateur groups and the BBC’s ‘Any Questions’ with Jonathan Dimbleby all coming between January and May.

Next year’s panto, Aladdin, is already lined up, with bookings open from January 2013.

When the theatre closed, it was much loved but in decline. So simply rolling back the clock was not going to be the answer. Instead we have a new vision to redevelop the Gaiety as a centre for theatre and the arts to stimulate and inspire Ayr’s cultural life.

The new Gaiety has something for the whole community…

The new ‘Stage Door’ café / bar / restaurant will be open seven days a week, offering a meeting place and anything from a coffee to a full evening meal.

Our partnership with the University of the West of Scotland (UWS) will create an innovative ‘learning theatre’ connecting Ayr’s growing student population with the life of the town in a centre for education, training and research. We are also developing plans to take the Gaiety into the community, with opportunities for involvement in all sorts of ways.

The Gaiety’s iconic original auditorium has some unique qualities and in the near future we will be bringing it back to its former glory – as well as modernising ‘behind the scenes’ working.

A 100 year-old building comes with more than a few signs of wear and tear, so we are going to need much more investment to achieve our full vision.

The balcony has some great views of the stage but it’s not really suitable for an audience at present. We have opened up the main entrance already but we need to do a little internal remodelling to create a more open and friendly space. All the seating will need to be refurbished or renewed and the stage facilities require upgrading. Full screen projection in the main auditorium will mean we can broaden our programme and there are many small but important upgrades to tackle too. Redecoration to restore the auditorium to its former glory will be essential. Finally, reducing costs and environmental impact of heating and lighting will be critical for our future economic and environmental sustainability. So we are delighted that Creative Scotland has backed our vision by earmarking over £1 million for the next stage in our restoration project.

With another £600,000 or so to raise, we have our work cut out. But we’ve already got some interest from funders and we are confident we can rise to this challenge in 2013. Of course, further refurbishment will mean the main auditorium will have to close at some point for restoration work. Creative Scotland have also provided us with funding to get the best expert advice so we can plan these works with minimum disruption to our programme (and nothing will get in the way of what we already have planned).

What about the running costs?

South Ayrshire Council has backed The Gaiety with a contribution of £750,000 over five years starting in 2012 to allow us to get up and running, build our audiences and establish a secure footing. This doesn’t mean we have money to spare, so right from the start we are making sure we keep income up and costs to a minimum. And by listening to our audiences, keeping prices down and utilising digital media we hope to make every show a great success.

AGP was set up in 2009 by two local residents, who were joined by three more to make up the current board. All are volunteers and have led an effort of another twenty or so local volunteers to work on fundraising, cleaning up the theatre, overseeing capital works and much more. As well as a team of dedicated volunteers The Gaiety has small but incredibly talented group of employees. Combining local knowledge with a strong track record from further afield, our staff team are at the core of our operation. They develop the programme, manage the business, oversee the technical side, promote our activities and provide essential back up to our volunteers.

Designed by local architect J.McHardy Young, The Gaiety Theatre first opened on 1st October 1902. The original interior had two tiers, could accommodate 1,200 and cost £9,500. Less than a year later, the theatre was devastated by fire – and met the same fate in 1955. On both occasions, rebuilding meant the Gaiety rose from the ashes, although each time in a changed layout.

For nearly half its lifetime, from 1925-73, the theatre was run by the Popplewell Family who built up much of the affection the Gaiety still retains today. In later years, while owned and run by South Ayrshire Council, it remained the premier theatre in South West Scotland. Over its long life the stage has seen performances from comedians, singers, variety acts and icons such as Sir Harry Lauder, Ken Dodd, Dave Willis, Jack Milroy and Gaiety legend, Johnny Beattie. But financial pressures and an operating model that no longer worked saw the Gaiety bow out on Saturday 31st January 2009.

South Ayrshire has not had a dedicated arts venue since the closure of the original Gaiety in 2009 which was the premier theatre in South West Scotland, presenting over 220 performances a year to an audience of just over 80,000.