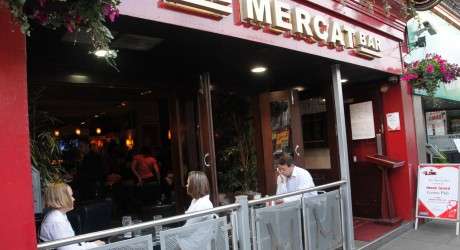 LANDLORD says Edinburgh still in with a chance, and as part of his annual festivities puts up warming food for everyone – including rugby fans – on Saturday 29 December.

Says a spokesperson: “Put aside the small matter of a nine-point deficit to make up. Nobody need enter into the fray without a warm feeling in their hearts. Well, their belly at least. It’s become as much a tradition at the Mercat as the 1872 Cup game itself. A winter warming selection of soup and stovies for fans and regulars alike on the day of the big inter-city rugby clash. As it’s the Christmas and rugby seasons, it’s all on the house too as a free festive foodie frenzy.”

Former prop forward, now just propping up his Edinburgh West End bar, award-winning landlord, Graham Blaikie, is set to tackle the festive fun before and after the traditional big match between Edinburgh Rugby and Glasgow Warriors on 29 December, with something just as tasty as that winning feeling – up to 1,872 cups of soup and stovies for everyone up for the 1872 Cup.

The spokesperson added: “With RaboDirect PRO12 league points at stake, and the historic 1872 Cup on the line for the winners, there’s hardly any need to turn up the heat between the sides. Graham though says get in the mood with a visit to the Mercat beforehand, to pick up your ticket for his traditional gift to the regulars, fans, and neighbours of the West Maitland Street hostelry.”

Said Graham: “No matter what the result, we’ll be welcoming fans and friends to our traditional winter warmer afterwards. If the Black and Reds do wrest the Cup back from their Glasgow rivals, we might just have an extra special celebration. Of course, if coach Mike Bradley says it’s OK, we’ll welcome the players too.”

It’s the oldest club rugby fixture in the world – and even Graham doesn’t claim to have been at the first one.

“There’s been a few incarnations of the rivalry over the decades, but I think if I was to take part, I would need a reincarnation,” joked Graham.

“I’ll stick to looking after the fans beforehand, and afterwards too.”