Media Release: Chile start to 2013 for The iCONic Project 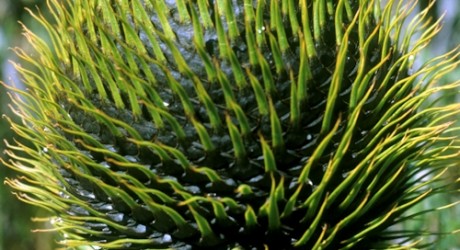 THE iCONic Project, a Perthshire Big Tree Country initiative set up to pioneer the conservation of threatened conifer species around the world, gets off to a ‘Chile’ start to 2013 with a major seed collecting expedition this month.

The seed collectors, The iCONic Project leader, Tom Christian and Martin Gardner, an expert in conifer conservation from the Royal Botanic Garden Edinburgh, will be joined by international colleague, Vanezza Morales, from the University of Santiago in Chile to look at developing ways of working with local people to secure the long-term conservation of these conifer populations.

Tom Christian commented: “Plans for this expedition have been in the pipeline for some time and this will be an important milestone for The iCONic Project.

“The main aim of the expedition is to collect seed from the threatened Chilean plum yew (Prumnopitys andina) from a valley which is due to be flooded in 2015 as part of a hydro-electric scheme. However, we will also be collecting seeds and cuttings from other species which are facing other environmental threats, before couriering them back to Edinburgh where they will be placed into quarantine by an expert team of horticulturists at RBGE.”

The trees in the valley of San Fabian Alico, which the seed collecting expedition will visit, are part of a northern group of tree populations that are genetically distinct, and several have already been lost as similar valleys are flooded for modern hydro-electric schemes within Chile.

The seedlings and young plants are destined for a range of carefully selected sites within Perthshire and will act as a valuable conservation collection that Chile can draw on to help restore its native populations in future years.

Other threatened conifers targeted in the expedition include the ‘Ciprés de las Guaitecas’ (Pilgerodendron uviferum), a small-growing conifer when planted in Scotland, and the Alerce (Fitzroya cupressoides), South America’s answer to California’s awesome redwoods and a ‘natural monument’ of Chile.

The Alerce can reach a towering 50m in height in the wild and live for over 3,000 years; however, its wide trunk and good timber have made it a target for loggers and it has suffered significantly from deforestation.

Tom Christian concluded: “Fieldwork like this is increasingly a necessity. While developing countries like Chile focus on their infrastructure and future, with limited resources they are often forced to de-prioritise conservation. The iCONic Project is uniquely placed to work with countries across the globe on an international remit to save these very important trees for future generations.”

Regular updates from the expedition will be broadcast on social media at www.facebook.com/btciconic for those wishing to follow the seed collectors’ progress throughout January.