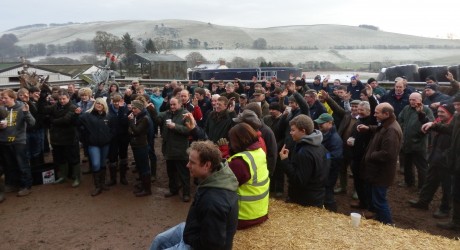 THE first meeting of the new Dumfries monitor farm generated major interest and attracted around 150 farmers and industry representatives from all over Scotland, and as far south as Dorset, to Hartbush Farm Amisfield on the outskirts of Dumfries.

The 35th monitor farm is the first farm in the Scotland-wide programme to focus primarily on beef finishing. In another first, two processing companies, Highland Meats and A K Stoddart, will play an integral part in the project.

They will work with the Paterson family to look at the production of the cattle and how to source what is required by their customers as well as the producer.

Hartbush has been in the Paterson family for nearly 100 years and is currently run by John and Amanda Paterson.

Their two children Louise, aged 17, who is studying agriculture at SRUC’s Barony Campus, and Steven, aged 14, are also heavily involved in the farm. Colin Rae, their only full-time member of staff, has been with the family since leaving college 14 years ago.

The farm runs to 600 acres with a 260 cow suckler herd of mainly Limousin or Simmental cross Limousin cows and around 30 followers.

The heifers together with 190 cows are spring calving with the remainder of the cows summer calving from 1st July.

Says a spokesperson: “Charolais bulls produce the finishing cattle with the Limousin covering the heifers and the Simmental used to produce replacement heifers to join those bought annually from the same farm in Aberdeenshire.”

The spring born bull calves are reared as bull beef, while the remaining steers and the heifers which are not kept for breeding, are finished on the farm.

The unit also carries 410 half-bred ewes which are put to the Suffolk ram with the ewe lambs sold on for breeding and the rest finished on the farm.

At the meeting, Matthew Currie from Smiths Gore, the facilitators of this project, split the visitors into groups which followed a tour around the farm steading, where expert speakers at each of the six stations explained the management regime for the cattle. They then headed to the local hall for soup, sandwiches and discussion.

The spokesperson added: The strength of the family unit at Hartbush is, without question, one of the mainstays of the business and the reason why it has already developed into a successful mixed farm.

“This was one of the main advantage points picked out by the ‘over 30’s’ community group, together with good husbandry and welfare, monitoring and action and an ability to listen and learn.

“The ‘under 30’s’ group, which included a number of students from the local SRUC Barony Agricultural Campus, focused on the quality of the cattle, attention to detail and a good daily liveweight gain.”

Kenny Adams, a past monitor farmer from Torhousekie, Wigtown, gave a brief talk on his experiences as a monitor farmer, which were very positive. He encouraged the community group and management group, when they were elected, to keep focused and keep momentum as the project developed.

Mark Allan from Highland Meats and John Craig from A K Stoddart, the two processors partners, both reiterated how pleased they were to be involved in this new venture and they hoped that the exchange of ideas, which would result from their involvement, would prove a great opportunity for everyone to collect more information on the supply chain and the way forward for the future.

The next Dumfries monitor farm meeting will be held on 24 January 2013 and anyone interested in attending or seeking further information should contact Judith Hutchison at Smiths Gore on 01387 263066.

For further information on monitor farms and detailed reports of meetings visit www.qmscotland.co.uk/monitorfarms.