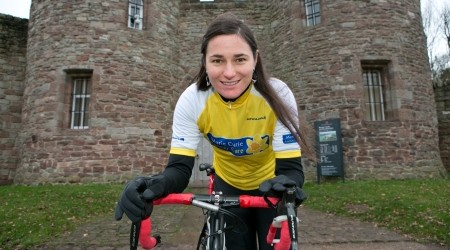 ONE of the UK’s most successful Paralympians, Dame Sarah Storey, will be continuing to pedal the legacy of the London 2012 Olympic Games this year in her new role as ambassador for the Etape Series of cycling events which includes the highly popular Marie Cure Cancer Care Etape Caledonia in Pitlochry, Scotland.

Speaking at the launch of the Marie Curie Cancer Care Etape Mercia, in Beeston Castle, England, Dame Sarah Storey said: “It’s fantastic to welcome a mass participation cycling event of the same calibre as Etape Caledonia to my home town.

“This really is entry level so it’s a chance for anyone who has been inspired by the success of the Olympic and Paralympic Games to get involved.

“I hope we can encourage people to sign up and take on the challenge for such a good cause – having a large scale cycling event in the region is very exciting.

“I’ve followed the progress of the Etape series of events since the launch of Etape Caledonia, the UK’s first closed road cycling event, in 2007 and it’s the ideal way for people to experience the sport and to raise funds for Marie Curie Cancer Care, a very worthwhile charity.”

The Marie Curie Cancer Care Etape Caledonia is arguably the UK’s most popular closed road sportive event, selling out in just 72 hours, and the Mercia event represents a third spoke in the series which also includes Etape Pennines.

Due to take place on 18 August 2013, Etape Mercia is an entry level sportive which will offer cyclists of all abilities the chance to take part in a 69-mile mass participation event on safe, closed roads in the scenic West Cheshire countryside.

Participants can register their interest now at www.etapemercia.co.uk to receive priority entry*, while general entries open on the 29th January. Entry to the Etape Mercia is £63. Four hundred free charity pledge places will be available to those willing to raise money for Marie Curie Cancer Care.

Over 3,500 cyclists will be able to compete in the sportive, which starts and finishes at Oulton Race Track (used by the British Superbike Championship) and takes in some of the county’s best-known sites, such as Beeston Castle, Little Switzerland, Delamere Forest, Shropshire Union Canal and the Cheshire Ridge.

Marie Curie Cancer Care, the event’s charity partner, is encouraging all participants to raise funds for the charity.

With strong links to charity partners, the Etape Series has also been instrumental in encouraging participants to raise well in excess of £1.5million over its seven year history for its title charity partners.

James Robinson, managing director of IMG Challenger World, said: “With cycling placed firmly in the hearts and minds of the British public, following an incredible sporting year, the brand new Etape Mercia offers riders the chance to test their legs over some of the most inspirational and challenging countryside in the UK.

“Etape Caledonia, our Scottish closed road cycling event, is immensely popular and we are delighted to bring the Etape Series to the north west of England – home of so many famous cyclists – and are sure the public will really get behind our participants as they have done in Scotland.”

“This ride offers cyclists an unrivalled individual challenge but also the opportunity to help others by raising valuable funds to provide more free nursing care and support to terminally ill people and their families.”

Top tips and updates can also be followed on Facebook at EtapeSeries or on Twitter, using @EtapeSeries and the hashtag #Bethefirst.