Media Release: Lynx get New Year off to roaring success 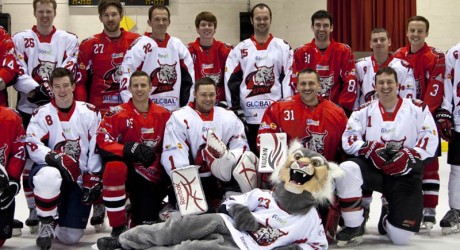 A NORTH-east premier ice hockey team has skated off to a successful start after winning their first two games of the year.

The Aberdeen Lynx Ice Hockey team, which is the Granite City’s only premier ice hockey team, picked up four points at the weekend with two crowd-pleasing performances, at home and away games.

The team successfully defeated the Edinburgh Capitals 9-5 on Saturday at home in front of a sell-out crowd of over 1,000 fans and then travelled to Dumfries where they won 4-3 against the Solway Sharks.

Team captain for the Lynx, Jordan Leyden, said: “Kicking the year off with two wins in a row has been great for the team and for the fans. Two games back to back were tough but the win on Saturday made us even more determined to win on the Sunday. Playing in front of sell-out crowds on Saturdays gives the team a real buzz and motivates us to put on a good performance for them.”

The Lynx, who compete in the Scottish National League, will be looking to continue their great form at their next game, which is away against Dundee Comets on the 19th January. The Lynx are urging fans to come along and show support at their next home game on Saturday 26th January at the Aberdeen Linx Ice Arena, against the Kilmarnock Storm.

Club chair of The Aberdeen Lynx, Alan Forsyth, said: “The team have had a tremendous start to the year with the two victories and it was great to see such team spirit as they had a hard task with back to back games. We had a capacity crowd at the game on Saturday and it is great to have the support on home ice. It is great to see a mixture of fans including families coming along to support the team as well.”

The Aberdeen Lynx have seven games left in the season, which run up until March with their next home game on the 26 January 2013 against the Kilmarnock Storm. The Aberdeen Lynx have junior and senior teams and welcome new players of all ages to get in touch if they are interested in starting a new sport.

For more information about the Aberdeen Lynx and their upcoming fixtures, visit their website www.aberdeenlynx.com and Facebook page www.facebook.com/AberdeenLynx.

Issued by Frasermedia Ltd on behalf of The Aberdeen Lynx.

MEDIA RELEASE posted by Fraasermedia. You too can post media releases (aka press releases) on allmediascotland.com. For more information, email here.