Media Release: Sell out for best-selling author’s book launch at The Avenue 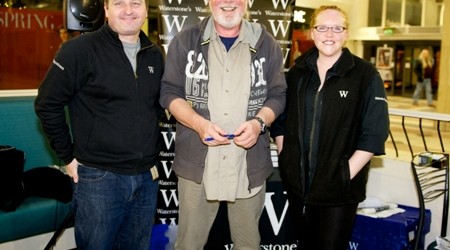 A SELL-OUT crowd of book-lovers flocked to The Avenue Shopping Centre in Newton Mearns on Tuesday evening (15.01.13) to hear best-selling author.

Peter May, discuss his work and promote his new book, The Chessmen.

Organised by Waterstones, a capacity crowd of 170 fans attended the event at Primavera Bistro to hear the award-winning Scottish television screenwriter, novelist and crime writer read from the final book in his popular Lewis Trilogy set in the Outer Hebrides.

Michelle McCabe, centre manager at The Avenue, said: “We’re delighted with the success of the Peter May event, the latest in a series of book launches organised by Waterstones at The Avenue.

“And readers can rest assured that they can look forward to seeing more of their favourite authors at The Avenue this year.”

In the Chessmen, chief protagonist Fin Macleod, now head of security on a privately owned Lewis estate, is charged with investigating a spate of illegal game-hunting taking place on the island.

This mission reunites him with Whistler Macaskill, a local poacher, Fin’s teenage intimate, and possessor of a long-buried secret. But when this reunion takes a violent, sinister turn and Fin puts together the fractured pieces of the past, he realises that revealing the truth could destroy the future.

After being turned down by several major British publishers, The Blackhouse, the first book in The Lewis Trilogy, was published originally in May’s adopted home of France three years ago.

It went on to be published all over Europe and won numerous prizes; as did the second book in the trilogy, The Lewis Man, following its publication a year ago.