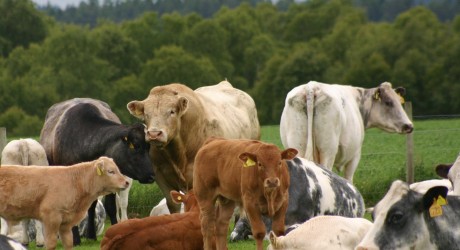 DISAPPOINTING conception rates among heifers bulled during the summer, was the main discussion topic at the Moray and Nairn Monitor Farm meeting.

Cluny Farm, near Forres in Morayshire, farmed by Robbie Newlands with his wife Kirsty and his father, also Robbie, is part of the national programme of monitor farms, led by Quality Meat Scotland (QMS).

The Cluny cattle enterprise is based on an out-wintered suckler herd of around 170 mainly British Blue cross Holstein cows. All progeny are finished with approximately 30 replacement heifers purchased annually.

In mid-March 2012, Mr Newlands had purchased 32 British Blue cross Holstein bulling heifers, ranging in age from 15 to 23 months. Once on-farm, they were isolated and checked over by farm vet, Mark Pearson of Moray Coast Vet Group.

“They were physically examined to ensure they all had functional ovaries and none were freemartin. They were also blood-tested to check none were BVD P.I. (Persistently Infective) and then vaccinated for BVD,” explained Mr Pearson.

Before the heifers were introduced to the bull, Robbie Newlands also treated them for fluke and worms.

At Cluny, the cows are mated with Charolais bulls. Heifers were put to a Limousin, however the Limousin bull was sold after the 2012 calving.

On 20th May a hired Simmental bull was turned in with the heifers for six weeks. The Simmental was followed for a further six weeks by a hired Limousin.

At scanning, 17 of the 32 heifers scanned empty, while the cows had scanning similar to previous years.

“Unfortunately this is not an unfamiliar situation in herds in the area this year,” commented Mark Pearson.

Robbie Newlands told the group: “The heifers which scanned empty were observed being served by both bulls, but were not seen bulling after the Limousin (the second) bull was taken out.

“Thanks to having scanned we know that we’re only retaining the in-calf heifers. And having identified the empty heifers, we can limit our losses by finishing and selling them.”

Aiming to sell 150 finished cattle per annum following scanning, Mr Newlands has purchased 12 in-calf heifers from a reliable source to ensure his 2014 sales target is met.

These heifers will remain isolated from the rest of the herd until their eventual calves have been ear tag notch tested for BVD. They will be integrated into the calved heifer section of the main herd after clear test results.

The possible causes of the poor heifer conception rate were discussed by the community group. Among the possibilities discussed was Campylobacter, but testing revealed no incidence.

Bull health and fertility were also reviewed. No health nor semen tests had been conducted but both bulls had been used successfully prior to Cluny.

Leptospirosis was also considered. No evidence of this disease was found among the heifers on their arrival at Cluny.

However, vet, Mark Pearson, explained: “Historically there was some Leptospirosis antibody in the herd, so theoretically naïve heifers could have become infected.”

Tick Borne Fever was another possibility. There is some history of tick on Cluny and earlier purchase of replacements was advised, to give more time to acclimatise.

High rainfall was also considered as a factor and the group were reminded of  the poor cow and heifer conception rates following the long, wet summer of 1985.

In 2011 there was a significant liver fluke problem in the sheep and a month after housing in late autumn 2012, weaned calves tested positive for fluke.

The bulling heifers had been fluked and wormed before the first bull was turned in. However, an area of a field where they had summered was an ideal habitat for the fluke’s mud snail intermediary host.

“No flukicide has any duration of activity,” said vet Mark Pearson. “So the risk of re-infection is quite real.”

With decreasing fertility in the national dairy herd in mind, the group questioned whether Mr Newlands should change his cow breed.

“We like the British Blue, dairy cross for several reasons,” commented Robbie Newlands. “Their docility is a major plus. We calve everything outside, so if a heifer or cow needs assistance, life’s a lot easier working with an easily-handled animal.

“The cows calve to a Charolais and in our outdoor wintering system, they don’t run to over-fat, helping to minimise calving problems. They’ve also got good feet which cope well with out-wintering on brassicas.”

Mr Newlands added: “But, I do admit I would prefer to buy fleshier, more Friesian than Holstein heifers if I could find them.”

Vet, Mark Pearson, offered general health guidance for suckler herd owners: “In an ideal world, breed your own replacements, referring to the health history of the dams when selecting.

“Failing that, buy from a regular, reliable source, with accredited herd health status which is at least, as good as your own.

“Establish what health risks your own herd is exposed to, and react to protect incoming stock. Vaccinate for everything your own cows are vaccinated against.

“If you have to buy stock of unknown health status, buy them very early, then isolate, blood test, vaccinate, worm and administer all required preventative health precautions. Then mix with your own cattle for a period of time before bulling. And don’t share bulls!”

This booklet can be downloaded from the QMS website at: http://ow.ly/gZjRy or requested by calling 0131 472 4040 or emailing: info@qmscotland.co.uk.