Media Release: ‘Oh What a Night’ you’ll have with New Jersey Nights! 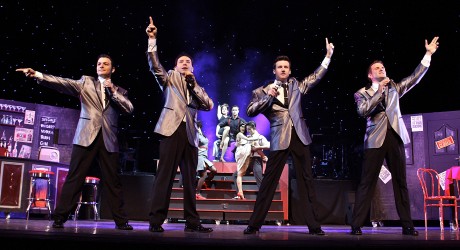 New Jersey Nights is a spectacular celebration of the music of Frankie Valli and The Four Seasons, and takes the audience on a nostalgic musical journey through the career of one of the biggest selling groups of all times.

From the back street studio in New Jersey where it all began, this vibrant production includes all of The Four Seasons’ greatest hits, including Can’t Take My Eyes Off Of You, Oh What A Night, Sherry, Rag Dolls, Big Girls Don’t Cry, Walk Like A Man and so much more.

The production features an award winning cast of singers, dancers and a rockin’ on-stage band.  Audiences go crazy for the show with sold out signs at theatres everywhere.

New Jersey Nights is one of the most popular Four Seasons tributes in the world today.  With record breaking ticket sales and first class critical reviews, this record breaking show is a must see!