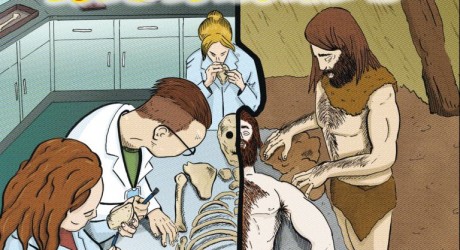 EXPERTS from a wide range of disciplines are pooling their skills and knowledge in a bid to piece together a comprehensive record of Scotland’s past.

Archaeologists, historians, scientists and specialists in climatology and the natural sciences hope that by bringing their research and data together in one place, they’ll be able, eventually, to map out the history of Scotland in its entirety.

Collaborating for the first time through The Scottish Archaeological Research Framework (ScARF), this research community expects to uncover new stories of Scotland’s past and solve mysteries that have continued to elude explanation.

People who work across completely different fields and time periods will add their own pieces to the jigsaw through a new website – www.scottishheritagehub.com.

From laser scanning a landscape by aeroplane to DNA testing a shattered skull, every bit of research will add to the picture of Scotland’s past to create a resource that can be explored and enjoyed by everyone.

Led by the Society of Antiquaries of Scotland, with funding from Historic Scotland, ScARF is working with a wide range of leading experts studying every period of Scottish history from earliest times up to the present day, including commercial archaeology companies, university academics, local authority archaeologists and archaeologists and historians from the Royal Commission on the Ancient and Historical Monuments of Scotland (RCAHMS), National Museums Scotland and Historic Scotland.

Telling Scotland’s Story features a series of surprising and unusual stories about Scotland uncovered by the latest research and presented in the style of a graphic novel, including:

• The Storegga Tsunami – a giant tidal wave that hit Scotland 8,000 years ago and caused the greatest natural disaster that Northern Europe has ever known. It coincided with a period of extreme weather patterns and rising sea levels, and was part of a process that saw an entire landscape submerged beneath the North Sea. The secrets of this lost land – known as ‘Doggerland ‘ by archaeologists, and once a rich hunting ground which stretched from Aberdeen to Denmark – are now being revealed.

• The so-called Frankenstein’s Mummies of South Uist – two mummified skeletons found buried under a Bronze Age House. Experts are continuing to puzzle over the fact that DNA testing revealed each of the skeletons – which are more than 3,500 years old – are made up of the body parts of at least two separate people.

• The emerging story of a whole landscape – many parts of Scotland are now being laser-scanned from the air, allowing archaeologists to literally ‘see’ through forests and crops to discover the remains of manmade structures such as walls, earthworks, burial mounds and cairns that are overgrown or hidden underground. They are then recreating these lost landscapes using 3D computer modelling.

• The trail of the Buannachan – the Gaelic name for the mercenaries who, in the 15th C, were one of Scotland’s greatest exports, travelling around Europe in their ocean-going long ships and selling their fighting prowess to the highest bidder. Archaeologists are now attempting to follow this mercenary trail across Europe.

Launching the research framework and the guide, Fiona Hyslop, Cabinet Secretary for Culture and External Affairs, said: “The creation of this strategic research framework for archaeology is an excellent example of collaboration across the historic environment sector. The work draws on the Society’s extensive network of fellowship and beyond: to consolidate existing knowledge; to identify future research questions; and to communicate knowledge and understanding to wider sections of society.

“I recognise the power of the historic environment to inspire, to educate, and to enhance our lives in many different ways. By providing information in a different format, targeting a different audience, I hope this publication will also whet the public’s appetite for using ScARF and its outputs – thereby unlocking the science and knowledge for a broader audience.”

Explaining the aim of the SCARF initiative, project manager, Jeff Sanders said: “SCARF is about creating a resource that can be explored and enjoyed by everyone. It is the first port of call for information on Scotland’s past – the place for students, writers, academics and documentary makers to find the most up to date account of the nation’s archaeology. And it is also the place to make connections with research teams and to join the dots between the past and the people who are investigating, uncovering and writing about it now.”

Gordon Rintoul, director, National Museums Scotland said: “This framework is the distillation of an enormous amount of research effort from many sources. We are pleased that National Museums Scotland curators have been involved right across all elements of the project. The results of the project will help define future priorities for archaeological work across Scotland. It also highlights how pooling the resources and expertise of a wide range of organisations can bring real benefits to researchers and the public.”

Commenting on the guide, Telling Scotland’s Story, Robin Turner, head of Survey and Recording at RCAHMS, said: “The comic-style guide has the potential to engage a wide audience, especially young people, with what is really exciting about archaeology. Our own expert staff, and many others from across the sector, are coming together to identify what we already know about Scotland’s past, and also, crucially, what we do not. This story of the nation is changing fast as new technologies are applied and new discoveries are made.”

Sha Nazir, the artist who worked on Telling Scotland’s Story, said: “Graphic art is a perfect way of presenting key moments in Scottish history. Visual storytelling was one of the first methods our earliest ancestors used to communicate thoughts and ideas – think of prehistoric cave paintings or Egyptian hieroglyphics. You could say that comic books and archaeology have been linked together from the start. The new stories emerging from the research were a wonderful inspiration for me as an artist.”

For further information, to arrange interviews or for images including the graphic novel artwork, please contact Giselle Dye at Pagoda PR on 0131 556 0770 or email Giselle.dye@pagodapr.com

1. SCARF was funded by the Scottish Government through Historic Scotland and has been made possible through the contributions of hundreds of archaeologists, historians, scientists and others. SCARF website www.scottishheritagehub.com

2. SCARF is led by the Society of Antiquaries of Scotland (SoAS) a charitable not for profit membership organisation founded in 1780. The purpose of the Society is the study of the antiquities and history of Scotland. For hundreds of years, the Society has provided a forum for debate, discussion and the sharing of knowledge. It is made up of thousands of Fellows from around the world – applications to become a Fellow are open to anyone with a passion and interest in Scottish archaeology and heritage. www.socantscot.org

3. Telling Scotland’s Story – 21,000 copies of the booklet are being printed and distributed to local authorities, museums, heritage centres and to the 3,000 fellows of the Society of Antiquaries. PDFs of the guide are available online on the websites of ScARF, SoAS, RCAHMS and Historic Scotland. The guide was written by RCAHMS Communications Manager James Crawford

4. RCAHMS is the National Collection of materials on Scotland’s built environment that connects people to places across time. It is the first port of call for information about the built environment of Scotland, from prehistory to the present. Its survey teams travel across Scotland, from St Abbs to St Kilda, to investigate, photograph and record our changing archaeology and architecture, both on the ground and from the air. www.rcahms.gov.uk

5. Historic Scotland is an executive agency of the Scottish Government charged with ensuring that our historic environment provides a strong foundation for a successful future for Scotland. The agency is fully accountable to Scottish Ministers and through them to the Scottish Parliament. For more information visit www.historic-scotland.gov.uk.

7. Sha Nazir is a comic book artist and co-founder of the Glasgow-based comic book publisher Black Hearted Press. He has 18 years experience working across illustration, graphic design, comic books and set and exhibition design, and has worked delivering learning programmes, events and resources for museums, galleries, theatres, communities and schools.