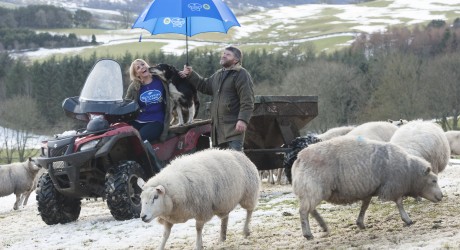 ONE of the country’s most popular TV weather presenters, Cat Cubie, has been meeting sheep farmers to hear first-hand about the challenges they have been facing as a result of the exceptionally wet conditions.

Martin and his wife Jane farm the 1700-acre Lurgan farm as tenants of Edradynate Estate. The couple, who have three daughters, run 600 ewes and 35 suckler cows on the farm which extends to 2500 feet above sea level.

The ewes are a mixture of Beltex cross Bleu de Maine and pure Blackface and Cheviots.

“The amount of rain has been horrendous,” said Mr Kennedy. “I’ve been recording the rainfall here for 12 years and the 2011 and 2012 rainfall tallies up to nearly 100 inches!

“The wet conditions have hit the quality of our silage and our fields are suffering from the cumulative effects of such relentless rainfall. We are a month late with marketing our lambs and the price we’re getting is £20/head back on average across the 650 lambs we sell,” he said.

Ms Cubie joined Mr Kennedy and sheepdog, Ben, to feed the ewes on the farm where snow has also been proving a challenge over the past few weeks.

She was also shown a polytunnel which has been used successfully for the past four years to house sheep during the lambing season. To withstand the weather conditions on the hill this structure is “hurricane specification”, explained Mr Kennedy.

Ms Cubie is probably best known for presenting the weather on BBC Scotland and the Euromillions lottery on BBC1 and has also been hosting her own show on Real Radio as well as writing a newspaper column.

During the coming weeks she will be working with Quality Meat Scotland and meeting some of Scotland’s top butchers and chefs to hear more about how to prepare a range of simple, delicious Scotch Lamb dishes.

Carol McLaren, Quality Meat Scotland’s head of communications, said:  “Scottish farmers have spent years listening intently to Cat forecasting the weather and it’s great that she’s keen to get a better understanding of our industry, including how much the weather can affect the job our farmers do.

“Scots eat only half of the UK average consumption of sheepmeat and we’re keen to encourage more young consumers like Cat take the opportunity to discover this great natural product produced right on our doorstep.”

Caption: Cat meets dog! Eight year old sheepdog Ben took a shine to Cat when she joined Martin Kennedy to feed the ewes on the lowground.