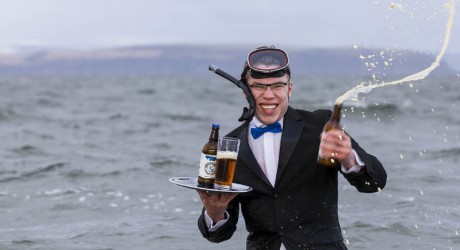 AN unique partnership between a brewery and an international wildlife charity is launched on the shoreline of Scotland’s Moray Firth today (Monday Feb 11).

A new beer created in support of Whale and Dolphin Conservation (WDC) means that, for every pint drunk, cash will be donated to help conserve and promote the work of the charity.

Called Bottlenose Bitter, after the Moray Firth’s resident population of dolphins, the beer has been created by the new Speyside Craft Brewery in Forres, just yards from the shores of the Firth.

Managing director, Seb Jones, 25, said that when he started his business it was always an ambition to find a way to support WDC.

“I’m a keen kayaker and, like everyone, get a thrill every time I see a dolphin in the Moray Firth,” he said.

“But essentially here I’m just a business playing my part as a link in a chain that benefits everyone.

“My business relies upon the success of the hospitality business, such as bars, restaurants and hotels, which in turn rely on tourism, which to a large degree in the Moray Firth benefits from the resident dolphin colony. Their continued presence here relies significantly on the work of WDC.

“To me, helping them in this way is a no-brainer.”

The bottlenose dolphin population in the Moray Firth is vitally important to the area both in conservation and tourism terms. VisitScotland say the attraction generates more than £4million a year in tourist income.

Bottlenose Bitter will be a permanent fixture in the range of beers produced by the fledgling brewery, which currently includes Randolph’s Leap Lager (4.9ABV) and Moray IPA (5.5ABV).

At 4.1 per cent ABV the new beer makes for a good session ale.

Seb admits that beer is not a product normally associated with wildlife protection and conservation, but explained that Bottlenose Bitter continues the brewery’s philosophy of naming beers after local icons to promote the area’s natural assets.

Bottlenose Bitter is a traditional amber beer, and carries the WDC logo and information on the label. Pump clips will also have a QR code to allow smart phone users to access the brewery’s website, where more information about the brewery, its beers and the work of WDC will be available.

A formal agreement between the brewery and WDC means that for every litre that leaves the brewery, the charity will receive a fixed donation.

Ali Jordan, WDC’s Scottish Dolphin Centre manager, said that she and her team were excited about the new partnership.

“We are delighted that Seb and the Speyside Craft Brewery have chosen to support us.

“WDC has two centres in the Moray Firth area, one in North Kessock and one in Spey Bay, and so it’s even more pleasing to partner with a locally-based business.

“The money that the brewery raises will help us fund vital projects that protect whales and dolphins in Scotland and around the world.”

As from today, Bottlenose Bitter will be on tap in bars and in bottles from off-licences across the north of Scotland and beyond. An online shop for UK-wide deliveries, along with a regular service to anywhere in Scotland will mean that customers will not be far away from a pint of Bottlenose.

The Speyside Craft Brewery opened for business in November 2012 with support from Moray Business Gateway, the Princes Scottish Youth Business Trust and the East of Scotland Investment Fund. The brewery’s logo has two dolphins at its centre, forming an ‘S’ denoting the Speyside Brewery branding.

A former chemistry student, Seb currently produces 4,200 pints of beer a week from his modern craft brewery, located in a Moray Council industrial unit in Forres.

WDC, Whale and Dolphin Conservation, (formerly WDCS) is the leading global charity dedicated to the conservation and protection of whales and dolphins. The charity defends these remarkable creatures against the many threats they face through campaigns, lobbying, advising governments, conservation projects, field research and rescue. It employs nearly 50 staff at centres in the UK, Europe, USA and Australia, and is funded entirely by donations and sponsorship

MEDIA RELEASE posted by Speyside Craft Brewery. You too can post media releases (aka press releases) on allmediascotland.com. For more information, email here.