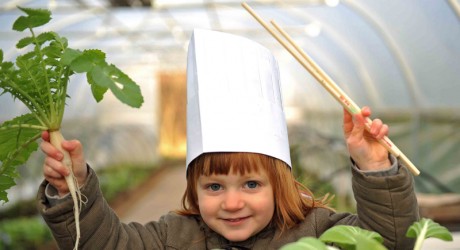 ONE of Scotland’s most unusual venues has embraced the Year of the Snake by planting a host of Far Eastern treats which were served up to diners to mark the Chinese New Year.

As head chef at the award-winning Gateway Restaurant at the Royal Botanic Garden Edinburgh (RBGE), lucky Ben Harrison has easy access to unusual fresh fruit, veg and herbs from all around the world which are grown on the site.

After putting his head together with Ben Dell, community gardener with the Edible Garden Project at RBGE – they marked the biggest date in the Chinese calendar by sowing and serving a crop of tasty Oriental goodies, including pak choi, chop suey edible chrysanthemum, wong bok Chinese cabbage, Tastsoi, Mizuna and Mibuna.

Chef Ben works for Sodexo Prestige, part of a 40-stong team which runs the restaurant and two cafes at the site and also caters for hundreds of weddings, conferences and other events at the historic Garden.

He said: “Each of the plants Ben has planted is distinctive and delicious which will make them really exciting to work with throughout this year.

“We love exploring new flavours in the restaurant kitchen and will be looking for interesting ways to incorporate these into our menus when the plants are ready to be harvested.

“Any chef would love to have an edible garden like this on their doorstep. We regularly incorporate produce from the Garden in our menus and diners love to know what they are eating is fresh and sustainable.

“In fact, we recently laid on a Chinese-themed menu which used lots of far eastern greens and salad ingredients that were grown right here, as well as locally-sourced, sustainable Scottish produce, including fresh fish.”

Botanist Ben Dell explained how the Chinese have centuries of skill and tradition cultivating vegetables throughout the cold winter which affects large parts of China– and how those same plants can thrive in Scotland.

He added: “It’s important for the project to explore the ingredients globally available and to try and make the most from what we can grow during the different seasons.

“Scotland experiences similar winter weather to that in certain areas of China, meaning the conditions are ideal to grow here. They are protected from severe weather in poly tunnels or our cloches so hopefully we can look forward to a bumper crop.”

The Edible Garden Project, supported by the People’s Postcode Lottery, aims to help people grow their own fruit and vegetables by offering advice on how to get started. It runs in partnership with the Scottish Allotments and Gardens Society.

Fruit and vegetables grown in the Garden are also used extensively in the menu offered to diners, including fresh chillies and lemongrass in Thai broth, fennel, cress, mustard, chard and rocket in the salads and apples and pears in home-made sauces and chutneys

Established in 1670, RBGE is renowned for its horticultural and scientific excellence and was recently awarded five-star status by VisitScotland.