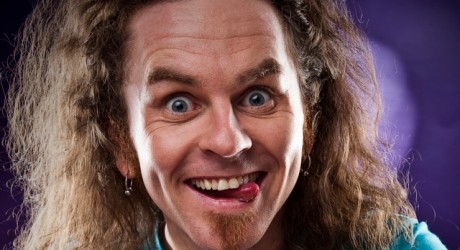 Next month, Billy will be the first comedian to perform a stand-up show in a tattoo parlour. It follows Billy’s 2012 comedy festival exploits when he staged a show in a comic book shop and hosted a live comedy wrestling show

Billy, one of Scotland’s most in-demand stand-up comedians, is bringing his acclaimed Show Me Your Tattoo show to Glasgow on March 29.

But, rather than take to the stage of a comedy club, Billy is staging the outrageous show at the appropriately-named Comedian Tattoo Studio in West Nile St.

Updated for 2013 the smash hit sell-out show of the Edinburgh Fringe takes a look at the weird and wonderful world of body art: from the sublime to the ridiculous; the silly to the sexy; the brilliant, bad and downright bizarre.

A blend of stand-up, chat and improv from one of Scotland’s top comedy talents, audiences can unveil their own ink, meet an array of special tattooed guests, play tattoo bingo and someone will even get the chance to be tattooed live on stage (don’t worry, it will wash off).

Not one to rest on his comedy laurels, Billy will also be performing a brand new, full-length stand-up show the following evening.

‘Easily Distracted’ is an hour of unbridled and uncensored mischief from one of most energetic, outrageous, innovative and easily distracted, funny men in comedy.

Billy may have supported some of the biggest names in entertainment, including Rhod Gilbert, Michael Winslow and Tim Minchin, but it’s his new solo show he’s most excited about.

Billy said: “Easily Distracted is the silliest, filthiest hour of comedy at this year’s festival.

“It’s the most appropriately named show I’ve done as it focuses on my lack of focus.

“Ironically, I changed the name of the show twenty times before I decided on Easily Distracted. It’ll be me flying by the seat of my pants but it’ll be great fun!”