Media Release: Castle of Mey opens its doors for a Bonhams valuation day 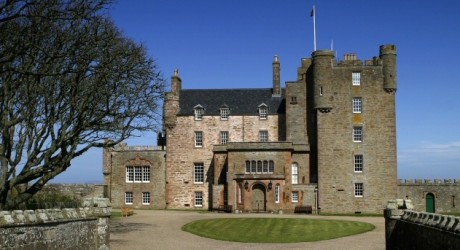 THE Castle of Mey is hosting a valuation day by Bonhams prior to their official reopening in May. So if you think you might have something of value, like a Rembrandt in the attic, then come along to the castle on the 11th April 2013 to have it valued.

Formerly the Queen Mother’s Scotland residence, the Castle of Mey’s isolated charm, distinctive look and the Queen Mother’s beautiful and beloved gardens make it an immensely appealing day out, and the valuation day is an excellent chance to see inside the Castle of Mey before 1st of May when it reopen to the public for the 2013 season, being closed during the winter months.

This is a charitable event. Donations of £5 per item valued go to theCastleofMey Trust.

The Trust has many aims including the preservation of historically significant buildings and monuments, particularly in Scotland, and the advancement of the historical and architectural education of the public by effecting opportunities for the access by the public to such buildings or monuments.

Bonhams hold regular valuation days throughout the country and have come across many interesting and valuable items. One example was a 42 year-old bottle of Glenrothes single malt whisky, which was discovered at a valuation day in Blair Athol in June 2011, it sold for £1,800

Another interesting item that was found during a valuation day was a 1924 Bentley three-litre Speed Model Tourer, a model made notable by its victory in the second Le Mans 24 Hour race. It was previously owned Major E.G.Thomson of Ainslie Place, Edinburgh but was found in a valuation day at Duns, Berwickshire. It sold in 2010 for £150,000.

There was also a painting by Alberto Morrocco titled ‘Still Life with Fruit and Sunflower’ that was found in a Dundee valuation day, this also sold in 2010 for £19,200.

About the Castle of Mey

The Castle, built between 1566 and 1572, is situated on the north coast of Caithness, in the parish of Canisbay, about 15 miles east of Thurso and six miles west of John O’Groats. The jutting towers and corbelled turrets are typical of that period of the 16th century, particularly the chequered character of the corbelling of the smaller turrets.

Bonhams, founded in 1793, is one of the world’s largest auctioneers of fine art and antiques. The present company was formed by the merger in November 2001 of Bonhams & Brooks and Phillips Son & Neale. In August 2002, the company acquired Butterfields, the principal firm of auctioneers on the West Coast of America.

Today, Bonhams operates through two major salerooms in London: New Bond Street and Knightsbridge; and a further three in the UK regions and Scotland. Sales are also held in San Francisco, Los Angeles, Carmel, New York and Connecticut in the USA; and Germany, France, Monaco, Hong Kong and Australia. Bonhams has a worldwide network of offices and regional representatives in 25 countries offering sales advice and valuation services in 60 specialist areas.

For further press information please contact Andrew Currie on 0207 468 5871 or andrew.currie@bonhams.com or press@bonhams.com