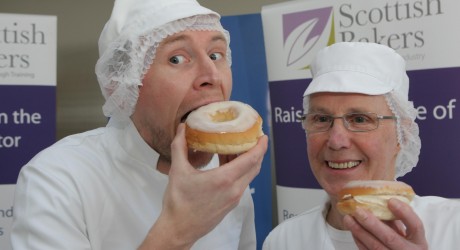 HARRY Gow, the Scottish Baker of the Year 2012, hosted an exclusive masterclass at his bakery in Inverness today to mark the launch of the 2013 search for excellence in artisan Scottish baking.

Harry said: “It was an honour to be crowned the first ever winner and today has given me the chance to say thank you by demonstrating some of my skills to some notable novices.”

Taking part in the masterclass and trying their hand at master baking were:

* Richie Foran who is the captain of Inverness Caledonian Thistle

All had an unprecedented opportunity to see a true master at work and to ‘have a go’ under the watchful eye of Harry himself and Scottish Bakers president, Gordon McGhee.

Guests were shown how the experts:

Richie Foran said: “Pressure… nah, it’s a piece of cake. Gino is the worst baker I have every seen though, he should stick to his day job!”

Nicky Marr said: “I have had a great time, its really good fun. But I am gutted that Harry wouldn’t share his meringue recipe!”

Ginno Conti said: “Nicky was a natural but, like Richie, I think I will stick to the day job.”

Kenny Riddle said: “I do bake at home but I have never done anything like this. It looks easy in the hands of the expert but its really fiddly.”

Vonnie Carson said, while making her Pavlova: “I am just going to go for it. Its an amazing feeling to make something that looks this good if I do say so myself.”

A fifth generation family baker who prides himself on making everything from scratch from ethically sourced, quality ingredients, Harry was crowned the first ever Scottish Baker of the Year 2012 at a glittering ceremony last year and since then the business has continued to go from strength to strength.

As has the Scottish Baker of the Year competition. Such was the interest shown by the voting public across the country in 2012, Scottish Bakers has once again decided to mount a search for the best baker in the land.

“We received some 12,500 votes from members of the public from all across Scotland in 2012,” says Gordon McGhee, President of Scottish Bakers.

“We are delighted to launch our second nation-wide search for the Scottish Baker of the Year in 2013.

“We are asking customers across Scotland to vote for their favourite baker and to rate their products in the following categories: morning roll, scone, small cake, savoury and bread scoring each on appearance, freshness, taste and value for money.”

Customers simply log onto www.scottishbakers.org/scottishbakeroftheyear or pop into your local baker to pick up an entry form to enter your favourite baker and register their votes for one or more of their product categories.

All voters will be entered into a free prize draw to win an iPad2, one for each category, there are five on offer!

TV judge and artisan baker, Paul Hollywood, will once again support the competition by compering the awards which will be presented in May.

Paul said: “I am delighted to once again be involved in this event. As a professional baker with strong roots in Scotland, I have been really impressed by the quality and creativity Scottish bakers are demonstrating and I look forward to being surprised and delighted again this year.”

As interest in home baking and artisan baked goods continues to grow, Scottish Bakers, which supports and promotes the interests of bakers in Scotland, will be looking for the best morning roll, loaf, scone, savoury, individual cake and new category biscuit whilst seeking to crown the best baker in the land.

2012 winner, craft bakery and family owned business, Harry Gow of Inverness, said of their win: “We were extremely pleased to be recognised as Scotland’s best baker.

“We have an ethos that we must make everything ourselves from scratch and this, along with our consistently high product quality, was recognised by the judges.

“Since winning our business has gone from strength to strength and we have been able to share our success with all of our customers by continuing to provide the best baked goods day in and day out.”

But most importantly, Scottish Bakers belongs to its members, we are all there for their benefit and are proud of our motto ‘for the good of all’.