Media Release: Man and his dog set off on six months in wilderness after losing home 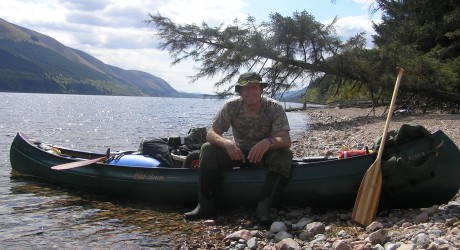 Fish, berries and edible plants on the menu for Wayne Hall who will trek across Scotland to raise money for housing and homelessness charity

A MAN who lost his home is set to embark on a gruelling six-month trek across Scotland to raise funds for leading housing and homelessness charity Shelter Scotland.

Today (Monday 25th February), Wayne Hall (46) will begin a wild camping trip with only his German shepherd Jerry for company for the duration of the 184-day trek.

Starting at Loch Morar in the Highlands on 25th February the pair are set to wind their way through Scotland stopping at 25 lochs on the way. They’ll complete the expedition on Wayne’s 47th birthday at Galloway Forest Park on 27th August.

Wayne – who is a self-employed tiler in Staffordshire – lost his home of nine years after his landlord died and the property was sold. Shocked at how quickly he went from living a secure and stable life to facing homelessness, Wayne decided to raise awareness and funds for Shelter Scotland.

Eating mostly ‘off the land’ for the majority of the trip, Wayne expects to lose 30lbs with fish, berries and edible plants on the menu.

“When I found out that I was to lose my home of nine years my initial reaction was sheer panic. I didn’t know what to do. Then I realised that actually I’m quite lucky. I’m in a position to find a new home and settle down somewhere else. Others are not so lucky.

“I chose to raise funds for Shelter Scotland because I empathise with anyone who has lost the roof over their head or is at risk of homelessness. It’s one of the most frightening things a person can go through. That’s why it’s so important that organisations like Shelter Scotland are on hand to help people in need like me.

“The one thing that will get me through the cold, wet and midge bites is the thought of raising money for such a good cause.”

Wayne, who plans to return to work after completing his trek, added:

“I’m excited to embark of this adventure but I don’t relish the thought of losing most of my creature comforts. It’ll be physically and mentally challenging but I’m determined to finish. I’m choosing this way of life, but many people don’t have a choice. If the money I raise helps just one person it’ll be completely worth it.”

Wayne plans to keep a blog during his trip on Facebook to update supporters of his progress and has set up a Just Giving page and aims to raise over £5,000 for Shelter Scotland.

“I am in awe of Wayne’s determination and generosity. Having just lost his home he is already thinking of how he can help others.

“At a time when funding for our vital services is under threat, people like Wayne make a real difference. We are humbled that he has chosen to raise money for Shelter Scotland. Donations like this go a long way and help us in our work to end Scotland’s housing crisis for good. We wish Wayne and Jerry the best of luck as they embark on their adventure.

“We look forward to catching up with Wayne’s progress and cheering him on as he crosses the finishing line on his birthday, as well as offering housing advice for his return home.”