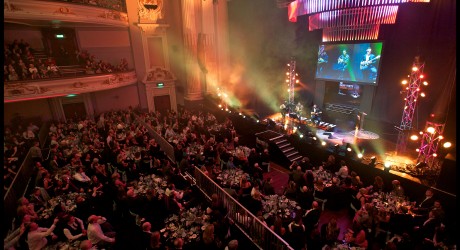 THE  first winner of the 2013 Radio Forth Awards has already been named – the delighted catering team chosen to feed almost 600 guests, including many celebrities.

Sodexo Prestige has been appointed to deliver a fitting menu for the tenth anniversary of the glittering award ceremony which will take place on November 6.

The annual event, held in Edinburgh’s historic Usher Hall, is already established as one of the hottest tickets in the Scottish music calendar.

Austin Tilsley, Scotland regional director at Sodexo Prestige, said: “Being involved in the awards at all is brilliant – the fact we’ll be playing such an important role in the tenth anniversary will make this really special.

“All of us were delighted when we were handed the chance to handle last year’s event, so being reappointed for 2013 is a huge pat on the back for the team and how they made it run so smoothly.”

The full line-up of stars that will turn out for the awards will remain a closely-guarded secret until the day, but last year’s VIPs included The Stereophonics and Olly Murs, while previous attendees have included Girls Aloud, Katie Melua, Sharleen Spiteri and Deacon Blue.

Likewise the menu laid on by Sodexo Prestige will only be unveiled on the day. However, it will follow the company’s commitment to use locally-sourced, sustainable and in-season produce.

In 2012, guests were treated to a menu which included feather blade beef sourced from Buccleuch Farms in the Borders and served in a pale ale gravy made with beer from Edinburgh’s Stewart Brewing; a variety of Scottish vegetables roasted in heather honey from Perthshire; fruit crumble, made with Aberfeldy-milled flour and Scottish butter and oats, served with Scottish cream supplied by Graham’s Dairies.

Austin added: “Our chefs are top notch and are looking forward to coming up with the ideal menu for the night. That’s the challenge for the kitchen team, but there’s a huge amount of other work that goes in to planning something as big as this.”

Richie Jeffrey, events manager at Radio Forth, said: “I am delighted to be working with Sodexo Prestige again as the main catering supplier for The Radio Forth Awards 2013.

“After a very successful initial year working with the company, I found Sodexo to have an excellent understanding of our event both from a working perspective and for client satisfaction.

“The quality and standard of food and service were second to none and I look forward to working with Sodexo again in 2013.”

Sodexo Prestige will have an 80-strong team involved in the event, which sees planning start months in advance and specially constructed kitchens erected and dismantled in the Usher Hall during just 36 hours.

Meticulous preparation is needed to work in the historic building and to ensure diners are served, while still retaining public viewing areas. The entire event has to run like clockwork to meet strict deadlines and broadcast schedules, as celebrities and other VIP guests have to take to the stage to give out or receive awards, or to perform.

Sodexo Prestige sources and recruits staff locally through colleges, universities and local recruitment websites. Kitchen, bar and waiting staff will include many workers from Sodexo’s dedicated pool of trusted contractors – all of whom are in the dark about the celebrity guest list until the last minute.

Austin added: “Radio Forth likes to keep the line-up a secret until the day of the event, because it is such a high-profile event. That added extra excitement for our staff who didn’t know who is on the bill until they arrived on the day.

“Our team will really push themselves to the limits to make sure everything works perfectly on the day. It is incredibly hard work, but the great thing about events like this is that they are a lot of fun as well.”

Having experience of catering for a wide range of clients, including The Open Championship – one of the world’s biggest golf events – means Sodexo Prestige is well placed to handle.

Sodexo Prestige operates at 17 top class venues in Scotland – and more than 50 across the UK – including the Royal Botanic Garden Edinburgh, Hampden Stadium, National Museums of Scotland, Perth and Hamilton Park Racecourses, Blair Castle and Aberdeen Football Club. It also provides catering for The Open Championship, one of the world’s biggest golfing events.

Sodexo Prestige in Scotland has enjoyed a record year for its conferencing and banqueting business with sales up 45 per cent in 2012.