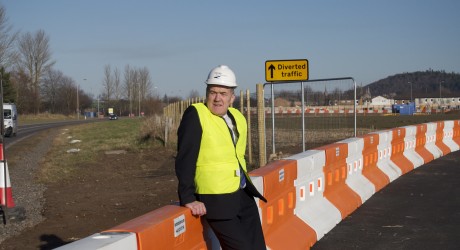 A YEAR-long diversion of the A96 Aberdeen to Inverness road will be in operation at Forres, Moray, from Tuesday March 5.

The diversion will take traffic off the main road for a short distance before returning to the west of the existing main roundabout that accesses the town and the Greshop industrial estate.

The £900k, 800m-long diversion is being made to allow work on the £45million flood alleviation scheme at Forres to continue whilst keeping traffic disruption to a minimum.

Whilst the diversion is in operation a section of the existing A96 will be dismantled and rebuilt three metres higher. This is to accommodate a defensive bund that will form part of the overall scheme.

In addition to the raising of the road, pipes, culverts, a flood defence embankment and a ‘grout curtain’ will be installed.

A grout curtain is a subterranean vertical wall that stops or reduces underground water flow. The grout is a liquid that is injected into the ground in a controlled manner to fill the voids between the granular soils.

Once these items have been constructed, the A96 will be replaced on its current alignment and a new roundabout will be constructed to allow two-way access into Greshop Road, the garden centre and industrial estate.

Whilst the diversion is in place signposted access to these establishments is via the main Forres/Lidl roundabout.

“The project is making really good progress thanks to a number of elements, not least the fine weather we have had over the last period,” he said.

“The protection and peace of mind this scheme will give the people of Forres will be worth the small inconvenience of this diversion.

“Moray Council’s investment in this scheme will mean that hundreds of homes and businesses can plan for the future with confidence.”

Project manager, Barbara Hellett, said that there will be a 30mph speed limit on the approach to the diversion as well as on its length. A mini crossing point for contractor’s plant has also been installed with traffic lights to ensure a safe crossing.

“The lights will be on green for the A96 most of the time, and will only go red when contractors need to cross,” she said.

“We don’t expect any delays as result of the diversion or the lights, but would remind drivers to observe the speed limit.”

Ms Hellett added that the diversion is opening a month early because things have gone better than allowed for in the project plan.

The length of time that construction work will take – especially during the winter months – is notoriously difficult to predict. How much time will be lost due to bad weather, how long will it take to procure the required materials, how long will it take for utility companies such as Scottish Water and BT to divert their infrastructure, etc.

“So far everything has come good and hence we are able to open the diversion one month early,” she said.

MEDIA RELEASE posted by Moray Council. You too can post media releases (aka press releases) on allmediascotland.com. For more information, email here.