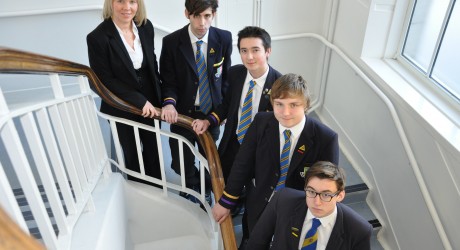 A TEAM of young economists from Robert Gordon’s College have made it through to the national final of the 13th annual Target Two Point Zero – Bank of England and The Times Interest Rate Challenge.

Competing at the area final in Manchester yesterday (27th February 2013), the boys triumphed against six other schools to secure a place in the UK final in London next month.

Taking place at the Bank of England, the team will present in front of members of the Monetary Policy Committee who are responsible for the important task of setting interest rates in the UK.

Following on from their win in the Scottish heat in Edinburgh last November, the team presented their assessment of the UK economy and their conclusions and recommendations on monetary policy.

The challenge started in September 2012 with around 300 teams across the UK competing in regional heats for the Challenge Trophy and £10,000 for their school or college.

Team leader, Sam, said: “We were all incredibly pleased to have achieved a place at the national finals. Each member put a huge amount of work into realising this opportunity and we look forward to presenting to members of the MPC at the Bank of England later this month.”

Teacher of Economics and Business Studies at Gordon’s, Mrs Jackie Farquhar added: “The team’s presentation in Manchester was professional, informative and original.

“Again, the team excelled during the challenging question and answer session, and the team should be commended for their insightful and in-depth responses.”

During the 43 regional heats, teams of four students, aged 16 to 19, analysed UK and global economic data and their possible impact on inflation and the economic outlook for the UK – just as the Bank of England Monetary Policy Committee does each month.

The team then decided if current monetary policy is appropriate or needs to be adjusted, to meet the two per cent inflation target set by the Government. In a presentation to a panel of Bank of England judges, the team explained their decision then justifies it through their answers to questions from the panel.

The winning team from each regional heat goes on to one of the six area finals to be held in February 2013, with the national final to be held in March at the Bank of England in London.