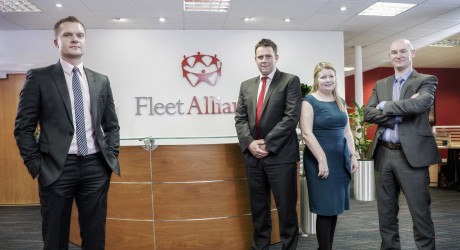 IN a move designed to assist its ambitious expansion plans, Glasgow-based Fleet Alliance, Scotland’s leading independent fleet management and leasing specialist, has strengthened its executive board with two new appointments.

They join managing director, Martin Brown, and commercial director, David Blackmore, on the executive board of the company, which recently revealed its fleet size had passed the 10,000 mark for the first time in its ten-year history, with a combined value of over £200 million.

With these key appointments now filled, the firm aims to expand its fleet size by 50 per cent, to 15,000 vehicles, as part of an ambitious five-year plan.

Martin Brown comments: “Grant and Angela have each been very influential in the success of the business to date and these appointments underline our confidence that they will continue to make lasting contributions to the on-going expansion plans of the company.”

He adds: “While 2012 was undoubtedly a tough year of consolidation and entrenchment for many firms, there are signs of economic recovery with increased employment and higher levels of business confidence, which augurs well for the future.

“At Fleet Alliance, we have enjoyed another strong year which has been the result of  a combination of factors, including our strategic decision to target the mid-size corporate sector, plus continued growth in our core SME market.”

Fleet Alliance, which employs 33 staff, working from its Glasgow HQ and across a network of satellite offices throughout the UK, has seen its turnover rise by 14 per cent to £4m, from £3.5 million the previous year.