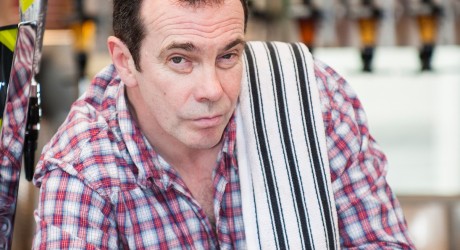 ACTOR, Gavin Mitchell – aka Boaby the barman from hit Scottish comedy show, Still Game – has lent his support to PPL’s move to encourage take up of its licences.

In a bid to encourage bars, pubs, clubs and other venues to ensure they are legally licensed to play recorded music at their sites, the comedian recently joined PPL when they attended Scotland’s largest hospitality, tourism and catering show, ScotHot at Glasgow’s SECC.

Here, the music licensing organisation communicated directly with the hundreds of owners and licensee holders highlighting its research in the sector which revealed that music in the workplace is vitally important to the success of a business.

Says a spokesperson: “The MusicWorks research revealed that recorded music can boost profitability and bring emotional and financial benefits.

“In a survey of Scottish SMEs, more than a third (37 per cent) of owner-managers questioned believed that playing music can increase trade or results.

“The research also found that business owners within the hospitality, tourism and catering industries believe music can bring emotional and financial benefits to staff and customers alike.

“More than three quarters (81 per cent) reported that playing music in the workplace increases staff morale and almost 80 per cent of the restaurant owners questioned, said music also helps to relieve tension and awkward silences.

“So important is music to this sector, that over a third (31 per cent) surveyed in the hospitality industry admitted that they would prefer to lose a day’s trade, than have to permanently stop playing music for customers or staff.”

PPL’s Scotland nusiness relationship executive, Laura Ferguson, who attended the event, said: “Times are tough but playing recorded music can impact positively on the bottom line for all businesses – and particularly those in Scotland’s hospitality sector and our important tourism industry.

“All we insist is that owners need to understand that they stay on the right side of the law.

“Scotland is well known for its love of music and our research aims to support businesses by helping them understand not only how cost effective, but also how beneficial, playing recorded music can be.

“A licence starts at only 19 pence per day and we think it is only right that those who make the music that helps keeps tills ringing receive the royalties that they are due.

“Whether you are just starting out in the industry or are already a well-known venue, music can play a huge role and it was great to meet with so many of Scotland’s proprietors at the show and to help ensure they are making the most of music, legally.”

“As every good barman knows, turning down the lights and turning up the music helps get the tills ringing of an evening.

“However, I had no idea there was actual science behind it! It makes sense to pop on a song for the staff and punters to enjoy and keep them coming up to the bar again and again!

“Who knew that playing a little bit of Rod Stewart on a Saturday night for the old yins or Paulo Nuttini for the young folk would actually be supporting the artists who played on these records?

“That’s what happens when you get your PPL licence to play recorded music. I just think of the PPL licence as something I need to have, like beer on tap, money for the puggy and glasses – I would rather that, than everyone went somewhere else that’s playing the songs they like.”

“If someone as daft as Boaby can understand the benefits of playing music in the Clansman to get the old boys up to the bar, then it makes sense for other businesses to do the same.

“Knowing that PPL are non-profit, means that the artists, who have spent years learning their trade, get the royalties that they deserve.

“As an actor, I would be saddened to see people using my work for free, so why shouldn’t music artists get paid for their work?”

The findings are part of the joint MusicWorks campaign from PPL and PRS for Music, designed to highlight the financial and emotional benefits that music can bring to business. For more information about when a licence is needed and how to purchase one, businesses are urged to log onto ppluk.com.