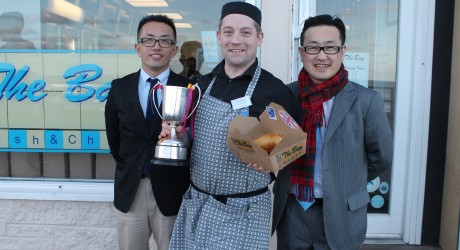 AN award-winning North-east fish and chip shop is set to cook up a storm across the globe following a visit yesterday (11 March) from some Japanese businesspeople keen to introduce the fish and chip culture to their country.

Says a spokesperson: “Award-winning chippy, The Bay Fish and Chips of Stonehaven, has been approached by a high-end Japanese department store chain to take part in its annual British fair to introduce the British traditional dish to the Japanese market.

“The department stores, which has a network of 15 stores across Japan attract around millions of customers through its doors each year and has been running the British fair since 1970, focussing on a number of British trades including tea, fashion, landscapes and last year’s fair had a Scottish theme. The theme for this year’s fair is Traditional British.”

The spokesperson added: “The Bay was contacted by the department stores as a result of being crowned the No1 UK Independent Takeaway earlier this year at the National Fish and Chip Awards. As fish and chips are regarded as a traditional British dish, the management at the Hankyu Hanshin Stores had this at the top of their list.”

The trip to Japan will include two weeks split between one Hankyu and one Hanshin store cooking up the fish and chip storm for the customers to sample whilst teaching the kitchen staff at the stores how to cook the dish.

Project and Business Development Executive for Hankyu Hanshin Express (UK), Keiji Hayashi, said: “This year’s fair will be the 45th fair we have held and we are eager each year to introduce British fair to the Japanese.

“Last year, the fair attracted 500,000 customers to our flagship store in Umeda, Japan. Fish and chips is relatively unknown in Japan and it is great to host these fair’s to introduce different produce to new markets.”

Owner of The Bay, Calum Richardson, said: “I am overwhelmed at the opportunity that I have been approached to take part in.

“To represent the classic British dish to the Japanese is an honour and I am sure I will be able to give the dish justice across seas.

“As well as bringing the great British dish across to Japan I will be eager to teach the market of the importance of sustainability.”

The Bay is a multi award-winning fish and chip shop which has a drive and passion for the environment, sustainability and local produce.

The shop is run by husband and wife team, Calum and Lindsay Richardson, who both drive the shops values. The shop has a three star rating from the Sustainable Restaurant Association (SRA) and were the first fish and chip shop to be granted MSC (Marine Stewardship Council) chain of custody for its North Sea haddock, which gives the firm total control of its traceability of its fish produce.