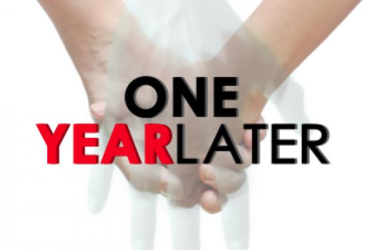 SKINS star, April Pearson, will play a lead role in the new short film being made by an upcoming Glasgow TV and film company.

Securing the popular star for the film is a real coup for young director, Fraser Coull, who has also cast Scottish actor, Mark Wood, in ‘One Year Later’, a ‘supernatural rom-com’.

Fraser, of Creative Talent Connections, said: “It’s such a brilliant achievement securing both Mark and April for the project. I’m a huge fan of their work and to be able to bring them up to Glasgow for the project is exciting.

“You want to cast the best people possible to bring your characters to life and I’m really lucky that we’ve got April and Mark on board.”

When asked why she joined the film, April said: “I was attracted by the script; that always comes first, really. It is a bittersweet tale and one that I look forward to exploring!”

Fraser and his team are hitting the internet to ‘crowdfund’ the film. They need to raise £2,000 and have managed to raise more than half of that so far.

The short film follows David (Rhys Teare-Williams), a young, ‘geeky’ individual, who has planned the perfect proposal for his girlfriend, Katy (April Pearson).

All he has to do is pull it off on the night! Helping David is his wisecracking older brother, Steven (Mark Wood), who has always ‘been there’ for David.

However, Steven is dead and is either a ghost or a figment of David’s imagination! River City and Highroad actor, Simon Weir, rounds out the cast portraying Doctor Evans.

Mark Wood, originally from Aberdeen, whose credits include ITV 2’s comedy ‘Trinity’, BBC comedy, ‘How Not To Live Your Life’ and STV’s ‘Taggart’ joins the film, playing Steven.

Mark said: “I wanted to be a part of this film as the script is really good and the team behind it are pulling together a great bunch of creative Scottish talent. I can honestly say this’ll be the one to watch out for.”

When asked why he was making the film Fraser said: “For the last few years, my work has mostly been about superheroes and Scottish mythological monsters, so I wanted to make something people could relate to, something that would appeal to a larger audience.

“Everybody has some sort of experience with family, so to tell a story that matters to me was something I couldn’t turn down.”

Once the film is finished and edited, Fraser will be taking it to high profile film festivals around the UK and beyond to show the world that Scotland has amazing talent here as well as brilliant filming locations. Fraser hopes it will encourage more filmmakers and TV producers to come to Scotland and tell brilliant stories.

“The whole point of Creative Talent Connections is to get people together and be positive about making films or television programmes. We all need experience and to learn how to work in a team, build up their portfolio of work and hopefully allow us to apply for funding in the future to keep pushing the envelope and make bigger and bigger projects.

“Scotland really is falling behind when it comes to the world of TV and film. For ‘One Year Later’, this is just the beginning and we need your help.”

Backers can go to http://www.bloomvc.com/project/One-Year-Later-A-Supernatural-Rom-Com and donate in return for a perk, such as a copy of the film on DVD or an invite to the screening later on in the year.

In addition, everyone who donates to the film will get a private link to view the film for a week after the film is completed.