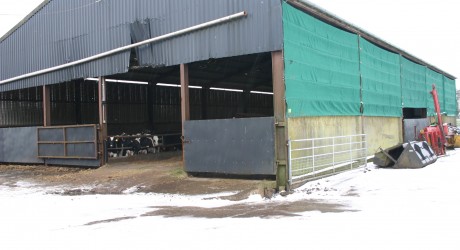 AFTER some straightforward changes were made to livestock housing, significant improvement in calf health has been observed at the Clyde monitor farm, Carstairs Mains, a 650-acre unit in south Lanarkshire, owned by Andrew Baillie.

Carstairs Mains, a mixed livestock and arable farm, is part of the network of Quality Meat Scotland (QMS) monitor farms throughout Scotland.

Calf pneumonia had been an on-going problem for Mr Baillie, who bull-beefs all the bull calves born in his 75 head suckler herd, along with an additional 120 dairy bull calves, purchased at approximately ten weeks old, from two local dairy farms.

To give the dairy calves protection against the most common viruses and bacteria which cause pneumonia, they are double-vaccinated on their farms of origin, with a combined viral and bacterial vaccine.

Nevertheless, pneumonia had been acknowledged by Mr Baillie to be suppressing the performance of the young bulls, as well as being the cause of mortalities.

Calf pneumonia had been discussed at the December (2012) monitor farm meeting. Farm vet Charles Marwood of the Clyde Vet Group had told the group: “The maintenance of a supply of fresh air lessens the risk of pneumonia.

“Air quality is important and good ventilation helps to prevent the build up of humidity caused by vapour from the stock, dung, bedding and water spillage.”

By igniting smoke bombs amongst the housed cattle, Mr Marwood had illustrated the air movement within the buildings, while explaining “the ideal situation is for the smoke to disperse through the building’s roof within two minutes”.

After observing the behaviour of the smoke, the group had promptly suggested that Mr Baillie should remove the roof ridging from the main finishing building.

A few days later, the roof ridging was off.

At the recent meeting, Mr Baillie updated the group. “Within minutes of the roof ridge being opened up, I walked into the shed and straight away the air quality had noticeably improved – an almost unbelievable, instantly better atmosphere, at virtually no cost!”

Also, after heeding comments from the group at the December meeting, Mr Baillie had put Secure Cover Windbreak curtains along what was an open-sided building, where young calves were housed.

At the December meeting the group, supported by vet Charles Marwood, had felt that the open, south facing side, had left the calves too vulnerable to chilling, winter winds.

“I considered Yorkshire boarding which would have cost around £1,200 plus several days work to put up,” explained Mr Baillie.

“But decided on the curtains, which were a couple of hundred pounds cheaper and only took a few hours to erect. Also each curtain covers one bay, and can individually be rolled up, fully or partially, as the weather changes.”

At the December meeting the youngest calves had been in the then open-sided building. “As a temporary measure, the recent new intake groups have gone into the warmer, main building, with batches of older calves currently being penned in the building with the windbreak curtains. Both groups are clearly thriving and content,” said Mr Baillie.

“Since making these simple changes to the buildings, the health of the young bulls is noticeably better, and there’s been no pneumonia in the most recent intake of dairy calves, a welcome improvement on previous batches.”

“It will be interesting to compare the performance, right through to slaughter, of previous batches of bulls, against the batches which have arrived since the changes were made to the buildings,” remarked Mr Baillie.

The next Clyde monitor farm meeting will be on May 22nd.

For more information, please contact either of the joint facilitators:

Caption: The Secure Cover Windbreak curtains on south facing side of the building at Carstairs Mains.