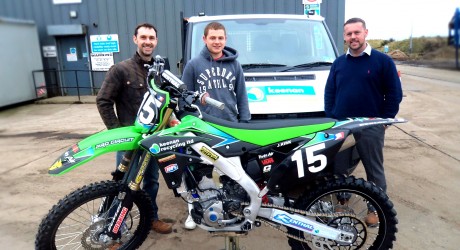 WORKING offshore means that motocross fanatic John Kirk can’t always get out on his bike, but the dedicated youngster still finds time to train for competitions when he’s away from home.

John, 20, from Auchterless, has been competing in the sport for 14 years, and will be taking to the track at Drumclog, just south of Glasgow for the second round of the Scottish Motocross Championship at the end of the month (30 and 31 March).

John, who is competing in the Scottish MX2 class this year, is being sponsored by North-east organic recycling specialists Keenan Recycling of New Deer, and started off the season well gaining a fourth overall in the first round.

John currently works offshore as a trainee production operator, and during his two-week stint offshore he keeps his fitness levels in check to ensure he is ready to race when he gets home.

John said: “I work on a two weeks offshore, three weeks onshore rota so I spend a lot of time in the gym at night on the rig to keep fit as I can’t get out and about.”

Some people might think offshore workers get fed up with their spare time at home, but this certainly isn’t the case for John.

He explained: “A lot of my time at home is taken up with motocross. I usually get out to practice on a Wednesday and race Sunday. In between that I have to train, which I do by running and cycling and there’s also some gym work to be done as well.

“Maintaining the bike also takes up a lot of time especially if I am on it during the week.  So when people say I must be bored when I am back home, they are wrong as it all goes into motocross.”

John’s best achievement so far came last year when he won the Scottish Semi Experts, and he hopes to do equally as well this year.

“It was my first national title and it was really good to have Keenan Recycling on board to win that. Having the sponsorship from the company is very helpful financially and also gives me an incentive to do well as I like to get good results to give them something back for their support.”

Keenan Recycling, which transforms food and garden waste into compost, is committed to helping youngsters and backs a number of local school initiatives, as well as sponsoring John.

Managing director of Keenan Recycling, Grant Keenan, said: “This is the third year we have sponsored John and we are impressed with his dedication and commitment to train for competitions, even when he is working offshore. We wish him the best of luck in this year’s competition.”