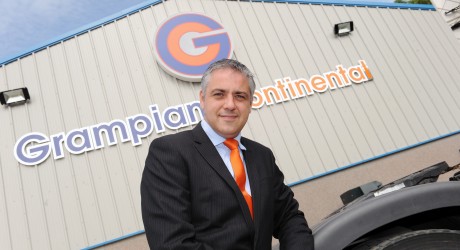 AN award-winning North-east haulage firm which has experienced major growth in the last year has invested £400,000 in its site as part of its business growth strategy.

Aberdeenshire-based Grampian Continental, which has firmly made its mark in the UK road transport sector made the investment to upgrade its 1.5 acre site in Kinellar and add to its fleet of vehicles and loaders.

The firm, which was launched in 2009 and last year named Scotland’s European Haulier of the Year, currently manages exports and imports across the UK, Europe and North Africa for more than 500 customers in the oil and gas sector.

The firm has five premises spread over Europe and the UK, and in the last year and a half has expanded in to Verona, Italy and launched its third UK base in Bedlington, Newcastle.

The new site expansion at its head quarters in Aberdeenshire includes an upgrade to the interiors and new security upgrades in the on-site yard, including a new CCTV system, electric security gates and surrounding security fencing.

The firm has also invested in two low loader trailers to add to the existing fleet of 50 vehicles and loaders.

The new low loaders are specialised to be in compliance with the height restrictions in Europe to offer more versatility in moving higher spec equipment.

Grampian Continental, Sales director, Gavin Murray, said: “The site expansion is part of a business plan to commit to continue to upgrade our facility to meet customer demands and expectations.

“We now have the ability to offer internal and external, secure storage utilising our available space in the yard.”

The firm has also extended its expert team in Aberdeen with the addition of two members of staff in the credit control department, and plan to extend the team further in the Aberdeen office, and at its office in Holland.

A large percentage of Grampian Continental’s work comes from the oil and gas sector to support exploration projects with logistical requirements.

The firm operates a varied modern fleet with the capability of transporting a diverse range of loads, from 1kg up to more complex loads, such as 80 tonne offshore structures.