Media Release: Frank To goes to Hell in latest exhibition 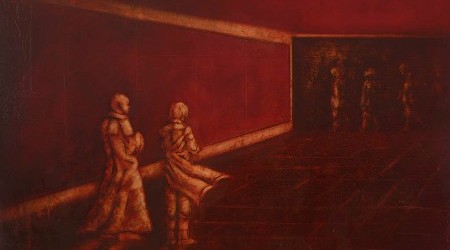 FRANK To, the Glasgow-based artist with a burgeoning international reputation as a leading contemporary figurative painter, goes to Hell in his latest exhibition.

The artist’s latest show, the result of two years work, has been inspired by The Inferno, the first section of Dante’s Divine Comedy, which details the major Italian poet of the Middle Ages’ journey through hell and purgatory to heaven.

Frank To said: “I’d always wanted to paint Glasgow and, having discovered Dante’s Divine Comedy, an acknowledged masterpiece of world literature, I was struck by the parallels between this 14th century epic poem and the political, social, historical and financial upheaval that modern day Glasgow is presently experiencing.

“The starting point to the theme of the exhibition came to me when travelling on Glasgow’s subway, when the outer and inner circles brought to mind the nine circles of Hell as described in Dante’s Inferno.

“Whilst the inspiration for the theme of the exhibition is The Divine Comedy, the technique I’ve developed for this series of paintings and prints has been influenced by such film directors as Alfred Hitchcock, Christopher Nolan and Ridley Scott, which is apparent in a cinematographic storyboard approach to some of the pieces.”

The exhibition features such instantly recognisable Glasgow landmarks as: the Hydro Stadium (portrayed as Stadium of Lust); Finnieston Crane; Provan Gas Works; the underpass at St George Subway (in a painting titled The Bowge Crossing) as well as Ibrox, which is portrayed as Limbo.

To’s Divine Comedy exhibition portrays the artist himself as Dante with his most famous collector and subject, actor Sir Patrick Stewart, assuming the role of Virgil, the Roman poet who guides Dante through Hell.

Sir Patrick Stewart said: “I have been following Frank To’s career since his graduation show at Huddersfield University nine years ago. As a collector, I am delighted to have several of Frank’s paintings and, as this latest work demonstrates, he is going from strength to strength.”

Frank To’s new exhibition, Dante’s Divine Comedy, will be at The Leith Gallery from 6th April to 27th April with support from RBS.

The exhibition comprises 33 works in total, with 25 paintings and eight fine art mono prints, ranging in price from £250 to £4,500.