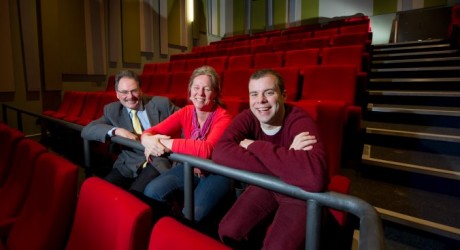 THE BIRKS Cinema in Aberfeldy today celebrated a key moment in its history as it took formal possession of the building, ahead of its imminent re-opening this April.

After a seven year fundraising campaign and a £1.3 million construction programme, led by Perthshire firm Hadden Construction, the ongoing care of The Birks Cinema has been entrusted to its recently recruited management team, who were present to take delivery of the key to the kingdom.

“The moment draws ever closer and finally to have the key to the building makes it all the more real for us.

“Often, it’s the trailer that sells the sizzle of a film and today, a simple item like this small key, holds the promise of an action packed month of celebration and joy as we bring this building back to life at the heart of the Highland Perthshire community.”

“As a local contractor we are delighted to have been involved in this exciting project to bring the Birks Cinema back to life and deliver a fantastic facility to the Aberfeldy community.”

Aberfeldy is set to roll out the red carpet this April in a series of events prior to opening to the public on Saturday 20th April.

Until then the cinema will be filled every day with guests selected from across Highland Perthshire to ‘test’ the cinema’s operations and ensure it’s in tiptop shape for opening. Events culminate in a glittering Golden Ticket event on Friday 19th April.

Paul continued: “We have placed Golden Tickets in retail outlets across Highland Perthshire and, if you’re lucky enough to find a winning ticket, you will be joining us on the red carpet on Friday 19th April for the latest Hollywood blockbuster to hit the big screens.”

The Golden Ticket promotion has been sponsored by Mackie’s of Scotland, and tickets are now available from a wide range of Highland Perthshire retailers and outlets.

No purchase is required to enter, just keep an eye out for the Golden Ticket posters in participating outlets for your chance to be a red carpet star for the evening.

For more information on the cinema and its film schedule visit www.birkscinema.co.uk.