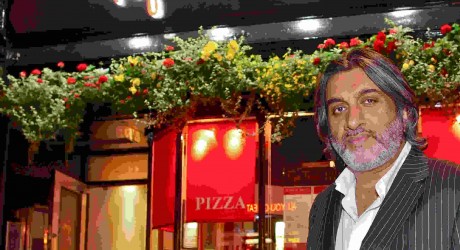 PAPA Tony’s, the Italian family restaurant chain, has announced plans to create up to 500 jobs in a multi-million pound expansion across Scotland.

The company which already has two Papa Tony’s restaurants in Glasgow is actively seeking sites to open at least 23 new establishments within the next five years.

An initial investment of up to £2 million is to be used to create three new restaurants in Glasgow by then end of this year.

That will take the total number of Papa Tony’s in Scotland’s biggest city to five.

Since opening the first Papa Tony’s restaurant in Glasgow’s Sauchiehall Street, and the second at Springfield Quay, last year, the increasingly popular brand has seen business grow by more than 25 per cent over the last six months.

Launched by self-confessed Italophile, Tony Hussain, who was recently named Scotland’s Asian Businessman of the Year, Papa Tony’s is recognised as the first Halal Italian restaurant chain in the UK.

It means the supply chain is short and easily traceable, a factor which has become a major concern for all consumers in the wake of recent food scandals.

Tony Hussain said: “All my meat, fish, vegetables and other ingredients are bought fresh from local businesses. People are fed up with being fobbed off with food that has been prepared in big industrial-style factories and then re-heated by untrained kitchen staff for which they are expected to pay a premium price.

“At Papa Tony’s, we know exactly where the food we serve comes from and that’s what people want.

“We also understand that if we support local businesses it helps the community and they support us.

“Papa Tony’s is an experience. It’s about good quality food made on the premises by trained chefs using locally sourced fresh ingredients that customers can have confidence in.”

The creation of bright and attractive restaurants, the introduction of light menus, colourful exotic ice creams, freshly prepared dishes, longer opening hours and the use of children’s entertainers at suitable times at the weekends have all helped to extend the appeal of the brand to a wide cross section of the community.

Tony Hussain, who already owns and runs the popular Cafe India in Glasgow’s Merchant City and has interests in more than 30 other restaurants across Scotland, is looking for rapid expansion of the business.

He said: “Papa Tony’s is going to be a UK-wide brand. Within the next few months, we will have five up and running in Glasgow and at least another 20 across Scotland and south of the border in the next five years.”