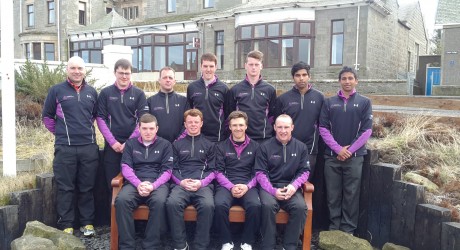 THE University of the Highlands and Islands student golf team has had their best ever result in a national competition.

It is the first time the team, which is mostly made up of players from around Scotland, has made it to the final.

The students beat off competition from Strathclyde and Aberdeen universities over the course of the six-day tournament, before facing competition favourites, the University of Stirling team, in Friday’s final.

The Highland team were eventually defeated 11-4, but coach, Alan Fleming, believes the players can be proud of their achievements.

He said: “The team is selected from a small number of students, but has produced some excellent results this year. The students have worked hard and compete well with teams from larger universities. They are a close team and have developed a great spirit amongst some very talented golfers.

“The last three years have seen some great consistency from the team which has established itself as one of the premier teams in Scotland and reached the semi-final at this event in the last two years. The team members should be proud of themselves and I’m sure staff and fellow students are also proud of them.

“I hope the university’s golf programme can continue to grow and encourage students to engage in the sport.”

Adds a spokesperson: “The Scottish Student Sport Golf Championships is an annual competition which pits teams and individuals from higher education institutions from around Britain each other. This year, players from 17 institutions entered the tournament, including players from Northumbria, Birmingham and Royal Holloway, London.

“The University of the Highlands and Islands team was captained by Callum McNeill from Lauder. The other team members were: Jamie Whittet from Muir of Ord, Ross Black from Alness, Derek Ramsay from Elgin, Darren Leith from Garmouth, John Mackinnon from Oban, Charlie Hickling from Kent, Oscar Hein from Finland and Sameer Bahl and Prashob Nair who are both from India.

“Many of the players are studying on the university’s golf management degree at North Highland College UHI’s Dornoch campus.”

To find out more about the university’s golf management degree, visit www.uhi.ac.uk

Photo caption: The university of the Highlands and Islands student golf team with coach Alan Fleming (back left)

The University of the Highlands and Islands comprises thirteen further and higher education colleges, specialist colleges and research institutions, distributed throughout the Highlands and Islands of Scotland. They are bound together through constitutional, management and academic structures, and co-ordinated through an executive office. Collectively, this is referred to as the UHI partnership.

There are currently over 7,000 students studying on undergraduate and postgraduate courses or undertaking postgraduate research with the University.

MEDIA RELEASE posted by the University of the Highlands and Islands. You too can post media releases (aka press releases) on allmediascotland.com. For more information, email here.