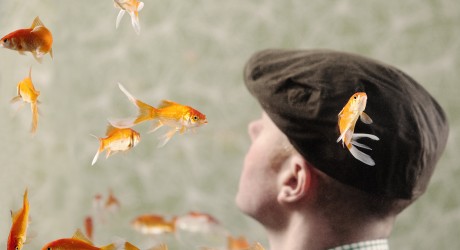 The National Theatre of Scotland presents

The Day I Swapped My Dad for Two Goldfish

by Neil Gaiman and Dave McKean, in a new adaptation created by Lu Kemp and Abigail Docherty.

With a Saturday Swap Shop for the family supported by Mackie’s at each venue.

THE Day I Swapped My Dad for Two Goldfish is an interactive promenade theatre production created especially for families and schools, adapted from the cult children’s graphic book by Neil Gaiman and Dave McKean.

Throughout the tour families will get the opportunity to take part in a Saturday Swap Shop.

The Day I Swapped My Dad for Two Goldfish has its Scottish premiere at The Beacon Arts Centre, Greenock with an opening performance on Saturday 27th April at 11am.

What if you wanted your best friend’s goldfish so much that you would swap anything you had for them? Anything.

Well, that’s just what Tom does and when M=mum finds out, she’s not pleased and Tom and his little sister have to ’GO GET DAD BACK’.

Unfortunately, it’s not that simple.

Nathan doesn’t have dad any more.

He swapped him for Vashti’s electric guitar.

And Vashti swapped dad, with Blinky, for a Gorilla mask.

And Blinky swapped dad, with Patti, for Galveston the rabbit. And Patti lives a very, very long way away.

Young audiences and their friends and families are invited to take part in an interactive promenade production to help Tom and his sister on their mission to get dad back.

The performance will move throughout interesting spaces in each theatre building and the audience will go on a journey with the cast, encountering surprises along the way.

On Saturdays at each venue, and in keeping with the swapping themes in the play, National Theatre of Scotland will host their own free Saturday Swap Shop event in the foyer of each venue. Children and their friends and families can bring a toy or a book to swap for other items on the swap table.

This family activity is supported by Mackie’s of Scotland. Mackie’s are coming back on board to support the National Theatre of Scotland’s work following a successful partnership with their sponsorship of the company’s first foray into eco-friendly theatre with the tour of the Last Polar Bears.

The Saturday Swap Shop is a fun and environmentally friendly way for children to recycle unwanted toys, giving them a future life in a new loving home and giving children the chance to take a home a new toy for free.

As a carbon neutral company, Mackie’s are the perfect partners support this free family activity that promotes sustainable consumption in a fun way.

The production is also supported by a programme of free primary school workshops, for schools booking to see the show, subject to availability.

The workshops are delivered by Eilidh MacAskill and Fiona Manson, who have previously performed to great success as The Polar Bears and in The Polar Bears Go Wild! (macrobert/Fish & Game).

The first stage production the National Theatre of Scotland produced in 2006 was a musical stage adaptation of Neil Gaiman and Dave McKean’s The Wolves in the Walls, directed by Vicky Featherstone.

This toured with great success, over a number of years, throughout Scotland, the UK, with a run at the New Victory Theatre, New York.

Lu Kemp has created vibrant, theatrical adaptations for children and young people working with leading young playwrights in Scotland. Kemp and writer, Oliver Emanuel, created Titus, with a new translation of Jan Sobrie’s text, which toured to acclaim in Scotland, including the Imaginate Festival 2012 and dates in Austria, Sweden and Northern Ireland.

Lu Kemp and Abigail Docherty created One Thousand Paper Cranes which appeared at the Imaginate Festival 2010 and was part of the Made In Scotland showcase 2011 where it won Best Scottish Contribution to Drama on the Fringe (Edinburgh Guide and Scottish Arts Club).

They are internationally acclaimed, award-winning artists.

Together Neil Gaiman and Dave McKean have created two children’s picture books The Wolves in the Walls and The Day I Swapped My Dad for Two Goldfish; two illustrated children’s novels; Coraline and The Graveyard Book.

They have also co-created the celebrated series The Sandman and worked together on a short graphic novel, a comic mini-series, a TV mini-series and on the film MirrorMask, as writer and director team.

Saturday Swap Shop: free family foyer event on 4 May from 12 to 1.45pm

Please note that this is a promenade performance which moves from space to space, within the venue. If you have any specific access requirements please contact the National Theatre of Scotland directly on 0141 221 0970 or info@nationaltheatrescotland.com

Lu Kemp works as a director and dramaturg for new writing, physical theatre and dance. She is Associate Artist with the award-winning company Inspector Sands for whom she recently directed Mass Observation at the Almeida Summer Festival. Directing credits include Arabian Nights for the Tricycle Theatre;  If That’s All There Is for Inspector Sands (Edinburgh Fringe First Award, 2009); Titus for macrobert and Imaginate Festival 2012; Encourage the Others for the Almeida and The Thirteen Midnight Challenges of Angelus Diablo for the Royal Shakespeare Company at Latitude. Lu created the award-winning One Thousand Paper Cranes which will be touring to the New Victory Theatre, New York in 2013.

Oliver Emanuel is a playwright based in Glasgow. He has written plays for the National Theatre of Scotland, Dundee Rep, Oran Mor, Visible Fictions, Macrobert, West Yorkshire Playhouse and the Tron, as well as extensively for BBC Radio Drama. Recent theatre includes Spirit of Adventure (Dundee Rep/Oran Mor); End of the World (for one night only) (Red Note Ensemble); Titus (Macrobert). Oliver’s next play is Dragon in a co-production by Vox Motus, National Theatre of Scotland and Beijing Children’s Art Theatre. For more information visit: www.oliveremanuel.com

Abigail Docherty won the Tron Theatre’s Open Stage Playwriting competition for her play Sea and Land and Sky which was subsequently staged at the Tron Theatre in October 2010. Abigail was a writer in residence at the Tron Theatre through the Pearson Playwright Scheme. Recent writing credits include: Polar Molar (macrobert); One Thousand Paper Cranes (Made in Scotland Showcase 2011 and Imaginate Festival 2010); Four Parts Broken (National Theatre of Scotland/Traverse Theatre); Room (Mayfesto/Tron).