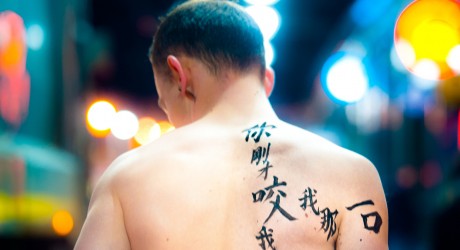 The National Theatre of Scotland in partnership with Òran Mór, SaiTa (Beijing) Cultural LTD, Tian Qinxin Theatre Studio and in association with the Confucius Institute for Scotland in the University of Edinburgh, present

It is also the first season of new plays from contemporary Chinese writers to be presented in the UK.

The National Theatre of Scotland and Òran Mór’s, third international a  Play, a Pie and a Pint season, starts on Monday 22nd April 2013 with each of the three productions running for a week at Òran Mór, Glasgow.

In 2012, an international new writing project was launched with the National Theatres of Scotland and China collaborating to discover new Chinese writers and plays from China.

After workshops and residencies in Scotland, three new plays were commissioned for the season.

These new plays were subsequently adapted by leading Scottish playwrights, Runo Munro, Davey Anderson and Catherine Grosvenor and are presented as part of an international a Play, a Pie and a Pint season at Òran Mór.

Inspired by real events, both intimate and political, each play dramatises the tension between public and private lives, the gap between rich and poor, and the dangers of telling lies to ourselves and others.

As cities grow at an astonishing rate and power shifts from one generation to the next, audiences are offered a glimpse into the lives of a handful of individuals whose stories paint a portrait of a society in flux.

“My passion is new writing. I wanted to take a group of Chinese writers through a collaborative process and produce plays that were unique to this creative exchange between Scotland and China. Literally, hundreds of Chinese writers wanted to come and take part in the first workshop National Theatre of Scotland ran in Beijing.

“They all had distinctive voices and bright ideas. Our first challenge was selecting which writers to invite into the room. Then we had to negotiate the language barrier, as well as the different sets of cultural reference points, artistic traditions, social backgrounds, political frameworks and so on.

“In amongst all that, we shared ideas, interests, inspirations and ways of working. I asked lots of questions about what it is like to live in China right now. These plays are the result of that conversation. A few tiny peep holes into parts of China we don’t often get to see.”

The development activities in China were facilitated by leading Chinese director Tian Qinxin, who is the vice-director of the Institute of Film, Television and Theatre, Peking University. She is also a theatre director with the National Theatre of China.

An ex-lover shows up on the doorstep of a married woman. He disappeared two years ago without warning and she has built a new life without him. His reappearance threatens to shatter her new existence and rekindle their romance. But first she wants the truth about why he left her.

A darkly comic crime story. Two construction workers turn vigilante, trying to right the wrongs of society by burgling a high ranking, corrupt government official. However, once they get inside it turns out they both have very different ideas about justice.

A thrilling psychological two hander about a promising and obsessive young pianist who commits a terrible crime to save his own skin. When he arrives home he finds his overbearing mother waiting up for him and demanding answers as to where he’s been. An unsettling true story about ambition, conspiracy and family.

Lin Weiran is a playwright and screenwriter. She graduated from the Central Academy of Drama, and is currently working with Beijing Opera Company. She is the director of IATC China branch and deputy director of Beijing Young Drama Association. Weiran’s work investigates contemporary relationships.

Jingfang Hao graduated from Tsinghua University in Beijing, China, majoring in Physics in undergraduate school and Economics in Phd studies. She started to publish short stories in 2007, and has published two science fiction novels, a short story collection and an introductory book of European Culture. Thieves and Boy is her first play for theatre. She is inspired by British theatre for its rich and dynamic verse.

Xu Nuo is a young writer who graduated from playwriting at the Central Academy of Drama. Her works include Hello, Dad (which won an award for Excellent Minority Screen Work). Her musical credit includes The Story of Teng Tao Lai which premiered at Poly Theatre in 2011 in Beijing. Currently, she is working on a TV drama script and film commission. Fox Attack is her first theatre production since graduating.

New plays from China season curator Davey Anderson studied Theatre, Film & TV at the University of Glasgow. He was Director in Residence with the National Theatre of Scotland 2006-07.

His work as associate director and/or musical director for the company includes: Enquirer, Peter Pan, Be Near Me, Architecting and Black Watch. His work as writer/director for the company includes: A Dead Man’s Dying, Mixter Maxter, Rupture and Snuff. He recently worked as Dramaturg on Menage a Trois. As a writer, Davey’s other plays include: The Static, Blackout, Scavengers, Playback, Clutter Keeps Company, Liar and Wired.

He was associate playwright with the Playwrights’ Studio, Scotland, 2010-11 and was co-recipient of the Arches Award for Stage Directors 2005.