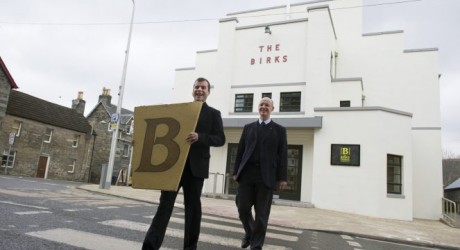 THE Birks Cinema, a new state-of-the-art cinema in Aberfeldy, sold its first tickets today, fittingly purchased by John Swinney, Cabinet Secretary for Finance, Employment and Sustainable Growth in the Scottish Government and MSP for Perthshire North.

John Swinney has been a staunch supporter of the local community’s seven-year fundraising campaign to bring the project to fruition and was on hand to congratulate the team of volunteers behind the re-launch of The Birks Cinema as they opened their doors to the nation’s press for the first time.

Journalists were treated to a short video introduction to the cinema’s 2D and 3D capabilities, before being given an exclusive opportunity to explore the magnificently refurbished listed building, which has been lovingly restored as part of a £1.3m construction programme, and to meet some of the eight-team members The Birks Cinema now employs.

During the walk around, the local MSP took time to nip to the box office, picking up tickets for blockbuster Ironman 3, due to be screened later in April and naturally steering clear of April’s other major film release, and the first film to be shown at The Birks Cinema Golden Ticket Event this coming Friday, Oblivion.

John Swinney commented: “This day has been long awaited and really drives home what community team work can achieve. I’m honoured to be first in line to buy tickets for my local cinema and very proud to see The Birks Cinema restored, resplendent and fully operational once again.

“Moreover, I am excited about the role the cinema will now play in the local community as an employer, as a creative inspiration, and as an asset to Aberfeldy and the Highland Perthshire area for both residents and visitors alike.”

Charlotte Flower, chair of The Birks Cinema, said: “John Swinney has been a prominent supporter of our project and we are delighted he has been our first customer.

“We’ve truly appreciated his backing and we look forward to seeing him return to The Birks Cinema as a regular customer as we know he’s a big fan of the movies.”

“This is an extremely important week for The Birks Cinema.

“To get everyone geared up and ready for opening to the public, from tomorrow we will be opening our doors to a series of test viewings with some of the area’s best (and smallest) movie critics drawn from local community groups and schools.

Then, on Friday we will stage a glittering Golden Ticket event with winners attending from across Highland Perthshire, before finally settling into our new routine from next Saturday.”

For more information on the cinema and its film schedule, visit www.birkscinema.co.uk