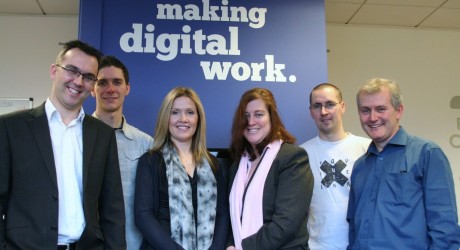 FAST-growing digital agency, NSDesign, has made new appointments to bolster its team after a record rise in profits.

The changes will allow Ennis to focus on further growth as the company moves deeper into consultancy and strengthens its position as a full service digital marketing agency.

NSDesign employs a team of eight at its base in Hillington Park Innovation Centre but punches well above its weight with a spate of recent public sector contract wins which have seen it deliver social media consultancy to the NHS and a series of social media training workshops to businesses in the East Ayrshire Council area.

Gary Ennis said: “This has been a sensational year even by our own high standards and its all down to the strength and commitment of our team.

“We have exciting plans and a lot of work to get on with over the next few months and it’s absolutely key that we hold on to and develop our staff.

“Colin and Kenny are already well known to our clients and I’m certain they’ll do very well in their new roles.”

NSDesign is in the running for a prestigious Scottish Business Award this summer having been nominated for ‘Online Business of The Year’.

Former US President, Bill Clinton, will be the keynote speaker in front of an audience of Scotland’s biggest and best businesses.

For further information contact Colin Kelly, NSDesign on 0141 585 6390. Or colin@nsdesign.net

NSDesign is a full service digital agency delivering web design and development social media training and consultancy and search engine optimisation. It was founded in 1999 and employs a full-time staff of eight.

It’s been recognised as the Best Value For Money UK Agency (less than 25 employees) in each of the last three years according to Recommended Agency Register (RAR).

The company is best known for its highly popular ‘Embrace The Space’ Social Media Masterclass series which helps small and medium businesses get results from social media.

Tickets are available now for the next workshop which takes place at Hillington Park Innovation Centre on Friday May 24th.

MEDIA RELEASE posted by Colin Kelly Media. You too can post media releases (aka  press releases) on allmediascotland.com. For more information, email here.