Media Release: The reasons to visit St Andrews Aquarium are black and white 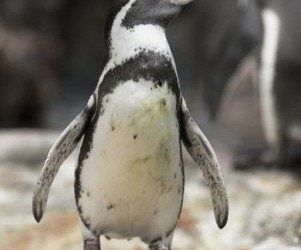 ST ANDREWS Aquarium in Fife has announced it is in the final stages of completing a new enclosure and expects the arrival of four new inhabitants over the coming weeks. Having just completed a five-month long development of a new exhibit, Aquarium staff have confirmed this will become the permanent home of a colony of female Humboldt penguins before the end of May.

The announcement that the Fife Aquarium is to soon be welcoming a ‘waddle’ of women to the coastal attraction is expected to be welcomed across the region, with the popularity of the species at an all-time high following the recent BBC One documentary which included the Humboldt species as one of the three featured in the series.

The Humboldt Penguin, named after the cold water current it swims in, originates from South America and normally breeds in Peru and Chile.

Andrew Whiston, displays manager at St Andrews Aquarium, commented: “We have all witnessed the sheer efforts Penguins go to every year to set up home in a new location, and for us our preparations for their arrival really have been very similar. There has been extensive work done on developing their enclosure, which has not been a public exhibit for many years, and it offers a chance for visitors to get really close to the Humboldts, as well as stunning views out to sea. To say that the team is excited about the penguins’ arrival in St Andrews would be an understatement – it’s been very tough keeping the secret under wraps!”

Keen to develop their success as one of Fife’s top tourist destinations, St Andrews Aquarium has continued to invest heavily over the winter period and this latest development in the Aquarium’s offering is hot off the back of last year’s refreshment of their aquatic displays, which saw several new fish and animals being brought into this popular visitor attraction.

Andrew added: “With a waddle of female Humboldts, the reasons to visit St Andrews Aquarium this year are simply black and white!”