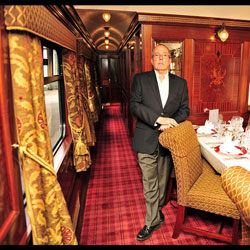 A TWO-year labour of love will come to fruition when engineer, Nigel Woolford, watches the world’s most exclusive train begin its latest journey round some of Scotland’s most scenic beauty spots.

Guests paying up to £4,000 a head for the privilege of travelling on the Royal Scotsman will be treated to the pinnacle of railway luxury – including dining in a brand-new carriage, lovingly hand-built from scratch by father of five Nigel, 58.

While the carriage now evokes the Edwardian heyday of luxury rail travel, just two years ago it was a rusting, stripped out hulk. Nigel has overseen each step of its transformation, shaping everything from the undercarriage equipment to the choice of lighting and the elaborate panelling.

His small engineering business, Assenta Ltd, is based in the hamlet of Dunsyre, 20 miles from Edinburgh, and has kept the Royal Scotsman running for the past 20 years, maintaining the carriages to the same standards of five-star hotels, while also adhering to stringent rail requirements.

But one of his biggest challenges to date has been the creation of Swift, the new pantry dining carriage.

He said: “It’s been an incredible project to be involved with and a proud achievement for us. Seeing Swift completed and working as part of one of the finest trains in the world is really something.

“The challenge of building new railway carriages for luxury trains does not come along every day. This is the first new carriage built for the Royal Scotsman since 1996.

“We’ve done plenty of tweaks and tidy-ups and maintenance over the years. But this has been totally hand-built from the shell up and we managed to do it all on time and on budget.”

The Royal Scotsman has been running since 1985 and was bought by the world-renowned Orient Express group in 2005. Assenta Ltd has the maintenance contract to look after the rolling stock.

Nigel added: “We look after everything from the wheels, brakes and draw gear to the interiors, water system, lights and heating – everything that is needed to keep a train running as well as everything you’d expect to find in a five-star hotel.

“Essentially, the Royal Scotsman is a luxury hotel on wheels. No-one who is passing through Rannoch Moor at 30mph while they take a piping hot shower stops to think about how the lights or water delivery works, it’s just expected. They just want to admire the scenery and know they are about to enjoy a superb breakfast.”

The train takes just 36 passengers across its nine carriages, which include an observation car with open verandah, two dining carriages, a library and a wine store. All passengers get an en suite cabin.

The latest project came about because the previous dining carriage on the train was timber-framed and proving increasingly challenging to maintain. That carriage, named Victory has an interesting history having once been part of a mobile election campaign train used by Winston Churchill.

However, most of the other carriages on the train are actually refurbished Pullman carriages, built by Birmingham-based Metro Cammell during the 1960s and the option came up to exchange the Victory for aPullmancarriage, named Swift. It was part of a series of carriages named after birds including others already in service on the Royal Scotsman, Snipe, Finch and Raven.

The exchange deal was agreed with David Smith, a rail enthusiast and owner of West Coast Railways in Carnforth, Lancashire. Mr Smith is one of the biggest independent train operators in the UK and owns many trains and steam engines, including the Hogwarts Express from the Harry Potter movies.

Nigel’s plans to transform the rundown Pullman were painstakingly mapped out in a series of computer generated designs and refined with Orient Express. Heavy engineering and mechanical work was undertaken at the Carnforth depot, which has the necessary equipment for heavy lifting.

Once the major engineering work was completed, the carriage was moved by road to Scotland for the next stage of Nigel’s refit master plan, which included his designs for a state-of-the-art LED lighting system. He also specified West African Sapele hardwood for the interiors, as a more sustainable alternative to the mahogany used in the rest of the train.

He added: “I can do many of the engineering aspects of the work, but what I can’t do personally I source other experts to work to my designs. I try wherever possible to use Scotland-based companies both for manufacturing and interior fittings.”

One of the biggest challenges was designing the elaborate marquetry panels, featuring an intricate Scottish thistle and a swift in flight. The design took Nigel weeks of work before he was happy for it to go into production.

The panels are crafted using hundreds of pieces of exotic hardwoods, inlaid in matching Pomele. The marquetry was manufactured by a company in Wales, but were pressed and lacquered in Scotland by Peter Craig.

Nigel added: “Even when the carriage is stripped out it is still limited in size. It is s only about 20m by 2.5m and you have to work with what you have got to produce something that not only matches the rest of the train but is fit for purpose. That means quality and luxury as well as functionality.

“The theme has to flow right through the train. Each carriage is bespoke but we have to ensure they feel the same, which involves matching the shape of the roof, the window layout and the panels.

“Rather than being facsimiles from the same template, each is unique. That kind of attention is what could translate into any space.”

MEDIA RELEASE issued by Holyrood PR. You too can post your story ideas for journalists (aka Press or media releases), on allmediascotland.com. Email here for more information.