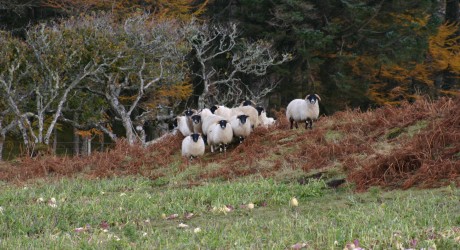 Mr MacKay has a five-year short limited duration tenancy (SLDT) on Torloisk, a challenging 7,600 acre unit, with just 380 acres ‘below the hill dyke’.

Torloisk, situated on the island’s west coast, is one of the network of Quality Meat Scotland (QMS) monitor farms throughout Scotland.

The sheep enterprise is based on a breeding flock of 850 ewes – 400 Scottish Blackfaces, 400 Cheviot X Blackface and 50 stud Cheviots.

There is also a pedigree fold of 55 Highland breeding females.

Over recent years, Mr MacKay has identified areas of ploughable land, within the protection of deer fencing, and planted forage crops to help give feed options to add condition to lambs and cast ewes destined for sale, while also preparing the ground for a full re-seed after the forage crop.

At a recent monitor farm meeting, the community group were updated on the performance of a total of 155 sheep which had grazed six acres of a mixture of stubble turnips and forage rape, from late September until mid-January.

In late September, with the Argyll Hill Lamb marketing scheme in mind, 60 Blackface lambs, average weight 28kgs, were turned onto the stubble turnips and forage.

They came off in mid-December, having gained an average of 8.7kgs per head in 74 days. Fourteen were ready for slaughter, the remainder were housed for finishing.

In late October, 20 lean cast ewes were also run on the six acres and came off in early January carrying good cover.

In mid-December, 75 ‘tail end’ lambs were turned on with an average weight of 25kgs.

They came off mid-January, having gained an average of 3kgs per head in 35 days. 58 were sold store, averaging £22.50, with the remainder housed for finishing.

At the end of January, Mr MacKay had told the community group that to date, 40 lambs averaging 19kgs deadweight, had been sold through the Argyll Hill Lamb Group for £5.20 per kg deadweight, netting after slaughter charges, a total of £3,252 (per head average – £81.30).

A further 20 lambs were due to finish within the next few weeks.

One of the cast ewes had died. The remaining 19 averaged £30 per head, against a community group valuation of £12, had they been sold in the autumn.

The additional costs for increasing the value of the sheep, which included vet and med, forage crop establishment, creep for housed sheep and hay, were calculated by the group.

Once all numbers had been considered, the net financial benefit of the venture, as at the end of January, was just over £1,200.00.

“A significant proportion of this figure is thanks to the Argyll Hill Lamb premium,” explained Iain MacKay. “The same finished lambs marketed conventionally would have probably netted around 25 per cent less money and resulted in the finishing project actually losing money.”

There are 18 Argyll sheep farmers in the Argyll Hill Lamb co-operative with the finished Blackface lambs being marketed through Forteiths, an Oban-based food wholesaler, which supplies branded Argyll Hill Lamb to a variety of food-service customers throughout Argyll.

“Here in this fabulous part of Scotland, we believe we produce a quality product, enhanced by the provenance of this scenic, clear-aired, west coast region,” said Mr MacKay.

“However, to achieve a premium economically, farmers need to work together within a branded marketing scheme.

“And with most farmers in this area traditionally store, rather than finished stock producers, we also have to be prepared to make changes to our farming systems to enable us to not only finish lambs, but also ensure they meet the customer’s specification.

“We livestock farmers in remote areas like Argyll, must squeeze every penny we can from the market, to help offset the ever-rising costs of production, which are inflated by the high cost of transport, both ways!”

The next Mull Monitor Farm meeting will be on June 6.

Caption: Finishing Blackie lambs on the dry lie-off area, with stubble turnip and forage rape crop in the foreground, at Torloisk.