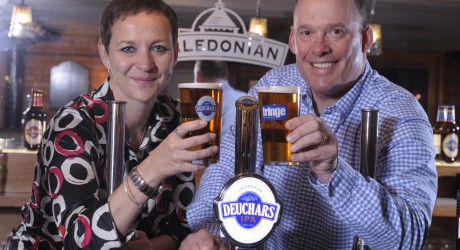 DEUCHARS IPA is set to satisfy the thirst of festival-goers once again as it toasts a three-year renewal of its support of the world’s biggest arts festival – the Edinburgh Festival Fringe.

Brewed by Caledonian Brewery, Deuchars IPA will again be ‘the ale of the Fringe’ and available in cask in Edinburgh’s quality pubs and some venues during the 2013 – 2015 events, which will attract millions of sightseers from all corners of the globe.

This year, there will be an on and offline campaign in a bid to interact with locals and tourists to complement the strong presence in the capital through the Deuchars IPA branded signage in over 250 venues during August.

“We’re really pleased to announce a further three-year deal with the Fringe. We have been major supporters of the event since 2010.

“Having a world event in your home city makes the potential connection kind of obvious! We really value our associations with Edinburgh and both organisations are proud of their blend of history and modernity.

“The partnership is a fantastic route to current Caledonian Brewery drinkers and Fringe fans who are new to Deuchars IPA, especially those from south of the border.

“Our aim is to do our bit to ensure visitors and locals have fond Festival memories by sampling at least a glass of our flagship ale.

“Over the next three years, we look forward to more tourists discovering and more locals enjoying a Deuchars IPA or two, whilst discussing the merits of the shows, which combined, make the Fringe such a brilliant event.”

Deuchars IPA has excited the industry and fuelled the Scottish ale renaissance and is a favourite amongst the likes of author Ian Rankin, Inspector Rebus and comedian Russell Kane. Its combination of taste and refreshment is delicious and slightly citrus, without being too bitter.

“The 2013 Edinburgh Festival Fringe promises to be the most exciting yet. Thousands of performers will visit the city this August, as well as audience members from across the world.

“The Edinburgh Festival Fringe Society will be here to support them all and help them to enjoy every second of the festival.

“We are proud to continue our partnership with Deuchars IPA and are incredibly grateful for their continued sponsorship of the Fringe venue boards and maps, which help residents and visitors navigate their way around the city, making their experience of the festival even more enjoyable.”

In addition, as one of the main Fringe sponsors, this year, Deuchars IPA has a partnership with The List magazine – one of the key guides to the Fringe Festival. The association aims to maximise festival-goers’ time spent in Edinburgh throughout the month of August.

Issued on behalf of Deuchars IPA by threebrand.

MEDIA RELEASE posted by threebrand. You too can post media releases (aka  press releases) on allmediascotland.com. For more information, email here.