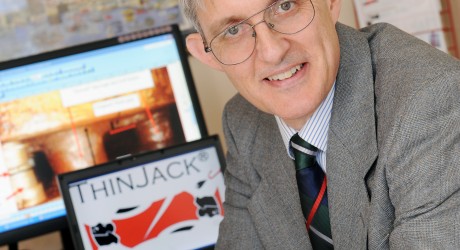 CHARITY work in Africa by Westhill-based specialist oil service firm, ThinJack Ltd, has inspired a business on the other side of the Atlantic to do their bit for a good cause.

ThinJack Ltd has been supporting an innovative project to provide education to some of Angola’s poorest children at a school which has been established thanks to the efforts of local man, Kisuka Baltazar.

He is gradually funding the improvement of the current school in the capital, Luanda, using contributions from his own salary and a small number of donations from oil and gas companies working in Angola, including ThinJack Ltd.

As well as providing cash, securing donations and transporting stationery to the school, ThinJack Ltd’s work has now inspired Zupt LLC to get involved, and the US-based company has now added its support to the project in the form of logistical and storage assistance.

Zupt is a privately-owned, international service and manufacturing company. They specialize in the integration and application of inertial technologies to onshore and offshore survey and positioning services.

Commenting on the reasons behind his company’s involvement, Keith Vickery, of Zupt, said: “We were fascinated to learn about the work Guy and his team are doing in Angola and it really struck a chord with us, so we were delighted to lend our support to this very worthy cause.”

ThinJack Ltd director, Guy Bromby, added: “We are very pleased that the work we have been involved with some quite some time is beginning to build momentum and we hope that other businesses and organisations will lend their support to this wonderful project to help educate the children of Angola.”

Anyone who would like to find about more about the school project in Angola should contact Guy Bromby at gcb@thinjack.info or call ThinJack Ltd on (01224) 330645.