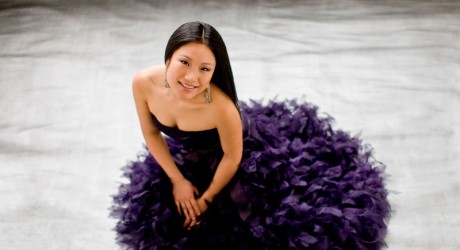 CHINESE pianist, Xiayin Wang, described by Gramophone Magazine as “astonishing”, appears with the RSNO and music director, Peter Oundjian, to perform two piano concertos from 20th century American composers this week and the following week will record the concerti with the orchestra for the Chandos label.

Xiayin will perform both Barber’s and Copland’s piano concertos at the Usher Hall, Edinburgh on Friday 26 April and at the Glasgow Royal Concert Hall on Saturday 27 April.

She first worked with the RSNO and Peter Oundjian in February of this year, recording Gershwin’s Piano Concerto in F, the third part of a triptych of American concertos due for release later this year.

Pianist, Xiayin Wang, said: “It was a wonderful experience to record the Gershwin Piano Concerto with the Royal Scottish National Orchestra in February, and I can’t wait to work with the orchestra again, this time to perform and then record the Barber and Copland concertos.

“I’m especially fond of the Barber work, which speaks directly to my heart.

“I would like to visit Scotland more often,” she says.

Added RSNO music director, Peter Oundjian: “It was an absolute delight working with Xiayin recording the Gershwin back in February, but this week I anticipate it will be an even greater pleasure as we perform to audiences in Edinburgh and Glasgow.

“Furthermore, the prospect of recording these concertos for my first classical disc with the RSNO is, I find, thrilling.”

The RSNO’s recording of the Barber and Copland piano concertos with Xiayin Wang will be released on the Chandos label in the autumn.

For tickets to An American Festival II, which also features performances of Copland’s Appalachian Spring and John Adams’ Doctor Atomic Symphony, contact the Usher Hall, Edinburgh on 0131 228 1155, or the Glasgow Royal Concert Hall on 0141 353 8000.

For more information go to www.rsno.org.uk

For further information, pictures or to request media access to any of the activities, please contact Daniel Pollitt, communications manager on 0141 225 3571, Email: Daniel.Pollitt@rsno.org.uk

MEDIA RELEASE posted by the RSNO. You too can post media releases (aka press releases) on allmediascotland.com. For more information, email here.